Pssst. Want to know how to turn even the least curious into avid nature fans? Show them something “icky.”

Why? Because anything that registers as “icky” engages the senses. No kidding. As soon as they say, “Yuck, gross,” you have them. “Gross usually equals interesting if the learner can take the next step,” says Deborah Koenigs, visitor services manager at Mingo National Wildlife Refuge in Missouri.

Parents of young kids, listen up. You can use this. But it’s true for adults, too. Many things we instinctively shy from as slimy, smelly, weird or grotesque also fascinate us. Think snakes and spiders and seaweed. Plants that dissolve animals (pitcher plants), birds that go for the jugular (peregrines) and wasps that lay eggs on caterpillars. And — lucky for us — nature is full of them. It’s just up to us to embrace the “ick factor.”

“One of our volunteers took this picture of an osprey pooping as it’s about to fly off,” says Keena Graham, former visitor services manager at Edwin B. Forsythe National Wildlife Refuge in New Jersey. “It was comedy gold! We showed it to a fourth-grade class and they loved it.

“We had their attention after that,” Graham continues. “They wanted to know more about what it ate and why the poop was white.”  [Answer: The bird’s diet isn’t to blame. Uric acid makes the poop white, says the National Audubon Society.]

“Scat is inherently icky and at the same time there is some intrigue that draws many people closer,” says Molly Stoddard, educator at the Prairie Wetlands Learning Center, located at the Fergus Falls Wetland Management District in Minnesota.

While teaching fourth-graders to “read the land” for evidence of animals, Stoddard stopped to investigate a pile of scat — examine its shape, size and contents. Scat, she says, is “full of mystery and wonder and gives us an idea of what kinds of animals we share our prairie home with.”

The students reacted true to form. “At first they were a bit amused, but then it was a mix of disgust and intrigue.”

Sometimes it’s not the leavings of animals that inspire disgust — and fascination — but the animals themselves.

That’s the case with sea lamprey, a parasitic, eel-like fish from the Atlantic Ocean that is protected in its native East Coast range (which includes Silvio O. Conte National Fish and Wildlife Refuge in the Northeast). Conversely, it’s a major pest in the Great Lakes. There, the ancient species uses its suction-hose mouth and sharp teeth to latch onto native fish and suck them dry.

In the Midwest, U.S. Fish and Wildlife Service biologists take sea lamprey to schools and sports events to teach people about their devastating impact.

“Because they are such a unique prehistoric fish, kids and adults are awed by their features,” says biologist Shawn Nowicki. “The ‘working end’ of a parasitic phase sea lamprey is fairly gruesome for a person seeing one for the first time. The typical responses range from ‘Cool!’ to ‘Gross!’ ”

What to do in the Midwest if you catch a sea lamprey? Don’t put it back in the water! says fish biologist Tim Sullivan.

At Mingo National Wildlife Refuge in Missouri, where Deborah Koenigs uses “slime” and “creepy crawlies” to provoke an awe of nature, she sees a similar revulsion to snakes. “Much of the public has a negative perception of snakes and a desire to kill every one they see,” she says.

She works to counter that fear.

“I have introduced our speckled kingsnake to many who are scared of snakes. He serves as a conversation starter to dispel myths and to discuss fears while representing misunderstood species. I’ve had many encounters that started with a visitor or student standing as far away as possible from the snake, and they end up touching or holding the snake. They feel a sense of conquering a fear, and a better understanding or at least tolerance for parts of nature they don’t ‘like.’ ”

Slime and Spines and Armor Plating

Some presumably “icky” things turn out to be not so icky on further examination.

At San Diego Bay National Wildlife Refuge, former visitor services specialist Lisa Cox was used to getting eye-rolls from teens when she had them collect and feel algae.

They'd screw up their faces at the idea, and then they'd get a surprise, she says.

“Feeling algae can help you see it’s not so gross after all! It can be spongy and stringy.”

As animals that inspire dread, scorpions rank close behind snakes.

But that dread impels many people to take a closer look.

Environmental education coordinator Tim Parker took full advantage of this when he used to lead nighttime scorpion hunts at Moapa Valley and Pahranagat National Wildlife Refuges in Nevada. Visitors were given UV flashlights to shine on the poisonous crustaceans, making the scorpions glow iridescent blue.

“What made these experiences fun for me was seeing the energy build in the crowd,” Parker says. “It was a mixture of fear, wonder, curiosity, and maybe something akin to that excitement you feel at a magic show. It’s the energy of the mysterious.”

Does the sight of hordes of horseshoe crabs repulse you? Better steer shy of Delaware Bay beaches — like those near Prime Hook, Bombay Hook and Cape May National Wildlife Refuges — in May then. That’s when millions of these creepy-looking armored animals, with their seven pairs of legs and long pointed tails, come ashore to mate and lay eggs. Video

Or you could fight that instinct and look closer. If you can embrace the “ick” factor, you might just find them fascinating. 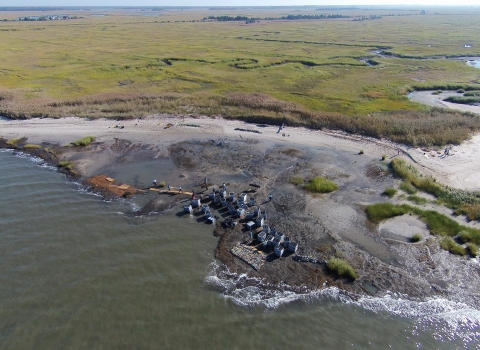