Craig Brook National Fish Hatchery was one of the first federal fish hatcheries, established in 1890. Here's a historical look back, profiling a pioneer in fisheries conservation and one of the hatchery’s first employees, Charles Atkins.

Fisheries biologist Charles Atkins was truly a visionary in his time.  He followed a life-long calling in the science of fish culturing, and over his 80-year life span, his career would take him to Europe, across the continental United States to the Pacific coast and by invitation to Japan in his interest to educate others with his knowledge of fish culture.

Atkins was a New Englander, born in New Sharon, Maine on January 19, 1841. He attended Bowdoin College, and upon graduation accepted a teaching position at Green Bay, Wisconsin. But after a few years of teaching in the Midwest, his interest in fisheries conservation and declining fish populations of the eastern rivers undoubtedly caused him to return to his native Maine to pursue a life-long career in fisheries cultivation and research.

Concurrent with Atkins’ early years, fisheries scientists were becoming increasingly alarmed by the decline of migratory fish species in the northeast United States. The states of Maine, New Hampshire, Vermont, Massachusetts, Rhode Island, New Jersey and Michigan formed a regional fish commission to address the issues. The State of Maine later formed its own fish commission, and hired Charles Atkins and Nathan Foster as its first commissioners.

The Maine commission’s first report in January 1868 stated that “the salmon is suffering from neglect and persecution. So peculiarly is it exposed to the attacks of man, so greedy and relentless has been the pursuit, and so regardless of their necessities has been the management of the waters, that in many rivers, both in Europe and America, it has become utterly extinct, and in very few of the remainder does it yield anything like the number that is was wont.”

The U. S. Congress followed the states’ lead, creating the U. S. Commission on Fish and Fisheries on February 9, 1871— the forerunner of the U. S. Fish and Wildlife Service. Spencer Baird was appointed its first commissioner, and among his first directives were to conduct studies on the decline of coastal and inland food fishes and methods of fish culture. Baird turned to Charles Atkins for his expertise, and directed him to locate a suitable site in Maine to raise Atlantic salmon. The site Atkins selected was a vacant mill located at the mouth of Craig’s Brook on Alamoosook Lake in mid-coast Maine.

Thus began Charles Atkins’ 48-year career as a fisheries biologist. In the absence of fish culture training in America, he traveled to Germany where he received his fish culturing education in Berlin, receiving his diploma in 1880. Upon his return to the United States, Charles Atkins had already developed his meticulous style in scientific methodology, his accurate data recording and retrieval techniques, the production of his own skillful illustrations dealing with external morphology and embryological development of fish species– and a final benefit– the use of photography in scientific data retention. With his “Kodak,” Atkins recorded and left us a visual window upon his world– not a vignette, but a Saturday Evening Post portrayal of his life’s work. He produced hundreds of photographs which illustrate well the process and product of fish culturing in its infancy.

Charles Atkins is known primarily for his work with Atlantic salmon, but he also conducted in-depth research with several other species such as cod, flounder, lobster, smelt, American shad, white perch and striped bass.

Atkins’ accomplishments won him considerable acclaim, as he published over a hundred papers, and wrote another hundred that were unpublished.  His extensive work and high quality photographic images, coupled with his insatiable desire for scientific detail and accuracy, earned him induction to the D. C. Booth Historic National Fish Hatchery Fish Culture Hall of Fame in Spearfish, South Dakota in 1996. Charles Atkins was truly an exemplary biologist of fish culturing as well as a model for human responsibility in stewardship for wildlife and wildlife habitats.

Today, the Craig Brook National Fish Hatchery continues this critical work for the restoration and conservation of Atlantic salmon and their habitat. The Craig Brook visitor center is open to the public and provides fun and educational experiences for families. 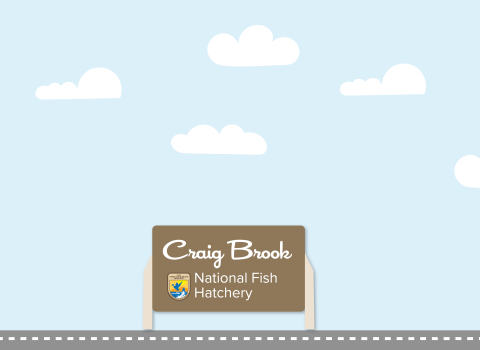