People have a variety of relationships with mushrooms.

Some people thrive on finding elusive morels or prized porcinis, while others are content to enjoy the luxuries of shiitake or truffles without the extra effort. Some of us have enjoyed the child-like glee of stomping on a puffball while the gamers among us have bestowed the highest honors on the Super Mario mushroom. Mushrooms were even celebrated by the legend himself, Nicholas Cage, which is about as good as it gets.

The wonders of mycology (yep, there’s a word for that) are unending and ever-fascinating, yet we still know startlingly little about our fungi friends – there is more to a mushroom than what we see. Below the surface of what we know as a “mushroom” lies a fantastical world.

Let’s Get Fungi with It

Mushrooms are the fruiting bodies of a larger, often seemingly invisible organism known as the mycelium (my-silly-um). The mycelium is composed of many long strands called hyphae. If you’re looking for a new Wordle, the singular of hyphae is hypha. What we know as fungi are the mycelium, its hyphae, and the mushroom (if the mycelium produces them).

Fungi were considered plants as late as the 1960s, but several big differences between the two led to a reclassification. For one, fungi are made of chitin, which is what a crab shell is made of. This makes fungi more closely related to mammals than plants. Second, fungi don’t produce their own food – unlike plants, which photosynthesize. Fungi are decomposers that break down their food and absorb nutrients via the large surface area created by the hyphae.

Fungi need energy to reproduce, so where do they get that energy? Fungi are decomposers, meaning they break down organic matter, such as leaves, decaying trees, animal carcasses, feces, and more. They use special enzymes to turn those materials into proteins they need to grow. 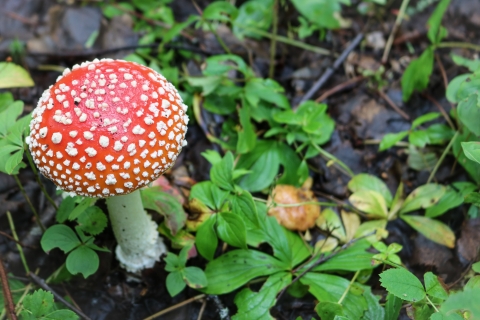 These decomposition superpowers don’t only benefit the fungi – they also lend a helping hand to the earth and critters around them. As fungi break down organic matter to absorb the nutrients they need, the debris gets recycled, resulting in healthier soils, which enables more growth for microbes, insects, plants, and trees.

Some fungi species are even capable of breaking down toxic materials such as pesticides, metals, and petroleum. These decomposition heroes are vital in keeping the necessary nutrients available for other living creatures to survive.

Fungi are immensely diverse. Most fungi are microscopic, while others are larger and immediately recognizable, such as the toadstool. Known fungi come in all shapes and sizes - from a common yeast cell to the largest organism on Earth (and can even be seen from space!). Not bad for an organism with no brain or central nervous system.

The curious world of fungi is vast, mystical, and maybe a bit magical – only 15-40% of fungi species have been described to date, quite a large gap of knowledge. Most fungi start their life as a spore, which is a microscopic particle. Think of spores like pollen for plants or eggs for animals. The spores are genetically identical to the parent cell and will develop into the same species – no matter if it develops sexually or asexually, and most fungi can do both!

Spores can be dispersed via wind, water, or by other organisms. Some fungi species disperse spores in creative ways like ejecting them, catapulting them from gills, or by simply waiting for an animal or insect to brush by and take some spores with them. Each fungus can release thousands to billions of spores in one go.

More than a Pretty Face

Fungi are more than just fun to look at – many of these fungi species provide benefits to plants, wildlife, and people, too. Most common knowledge about mushrooms centers on whether we can eat them, while the biological value and services provided by fungi are still somewhat of a mystery.

From food to medicine, fungi can be found in every aspect of life. Yeast is a form of fungus that serves as a foundation for what we know of as life today; without yeast, we wouldn’t have breads or alcohol. Cheese is another staple for many people, and some cheeses are sought out for their moldy features – and remember, molds are a type of fungus. Penicillium is one of the most famous molds in the medical field, used to make life-saving penicillin. But the benefits to human life and society go well beyond these physical products derived from fungi.

Over the last few years, scientists have taken a closer look into the world of fungi, and they are finding strong evidence that these mysterious species play a major role in maintaining healthy landscapes. Putting it bluntly, without fungi there is no life. While there are some harmful fungi out there – like pathogenic fungi - there are a few species that we depend on for trees and plants to live – which, in turn, other species depend on.

And here’s another word to add to your toolkit: mycorrhiza (my-co-rye-za). These special fungi have very unique relationships with plants. These fungi thread through the underground root system of plants and forests, creating a “mycorrhizal network” that connects plants to one another. This underground world allows plants to share nutrients and water, creating a thriving community built upon these little linkages. Some have even described this powerful relationship between fungi and plants as the “wood-wide web.”

Researchers have found that fungi play a major role in climate resiliency, including resistance to droughts, floods, wildfire, and even climate change climate change
Climate change includes both global warming driven by human-induced emissions of greenhouse gases and the resulting large-scale shifts in weather patterns. Though there have been previous periods of climatic change, since the mid-20th century humans have had an unprecedented impact on Earth's climate system and caused change on a global scale.

Learn more about climate change . In 2022, a team of researchers published a report that confirmed the role of fungi in maintaining stable, healthy lands. According to their findings, a diverse community of fungi provides a range of services that help protect landscapes from drought, an extreme weather event that is expected to increase in frequency and severity around the world as the impacts of climate change worsen – making the role of fungi even more important in the future.

Landscapes that are better protected against drought also see better resilience against wildfires, thanks to the moisture stored within the soils and vegetation. In areas that do burn, fungi are among the first species to return – including the prized morels. This resurgence of life following a wildfire is important for recovery, and fungi are an important part of that process.

Similarly, resilience against drought can also lead to protection against other extreme weather events like flooding; severe flooding occurs when high amounts of rainfall in an area cannot absorb the sudden rush of moisture. These are usually areas that have been developed – like roads and parking lots – and lands with unhealthy, compacted soils. Healthy soils, nourished by fungi, are better able to withstand these extreme weather events.

The sky is the limit when thinking about the services fungi can provide. There are the fungi that produce mushrooms that we can eat, those that produce dyes that we can extract, and mycelium can be turned into biodegradable packaging. There are medicinal fungi such as chaga and fungi that have even been used to manage spills and contaminants. Farmland can benefit from fungi, too, because fungi are essential for healthy soils and can function as an alternative to pesticides. Future uses of fungi could be limitless; researchers are already experimenting with fungi’s ability to break down materials such as plastics. 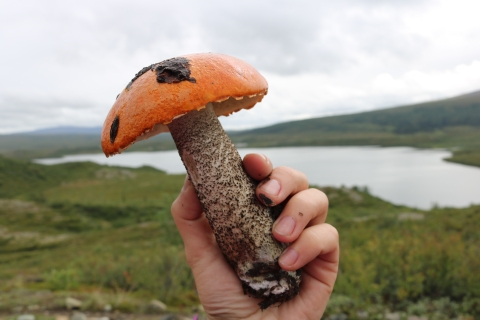 Disclaimer: If you are a mushroom hunter, please remember the importance of knowing what you are picking. A tip is to learn poisonous look-alikes to ensure that what you are eating is in fact edible. Additionally, different types of mushrooms can impact individuals uniquely. A good rule of thumb is to always err on the side of caution.

Even though we know many species of fungi are critical for the survival of life as we know it, conservation of fungi species is not well understood. There are no fungi species listed under the Endangered Species Act. Part of the reason for this is the widespread misunderstanding of what fungi really are (not plants!) and how important they are for life. Before we can truly focus on conservation, though, we must first learn how to acknowledge and appreciate these unsung species. As with many other steps in our scientific discovery as humankind, learning is the first step towards applying that knowledge for the greater good.

So, embrace your inner fungi and spread that knowledge like spores – share what you know with the people you know. Fungi are key species for the function of life as we know it and so we must ensure that conservation efforts include these weird, fuzzy, and sometimes freaky friends.

To learn more about the fungi mentioned in this story, check out the following resources: 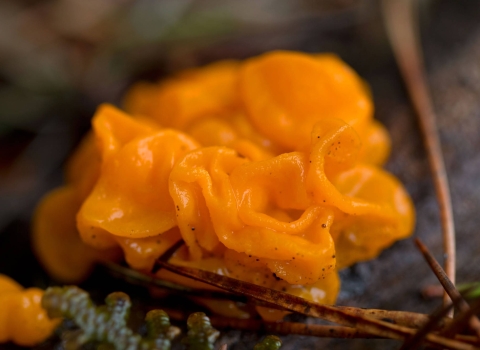 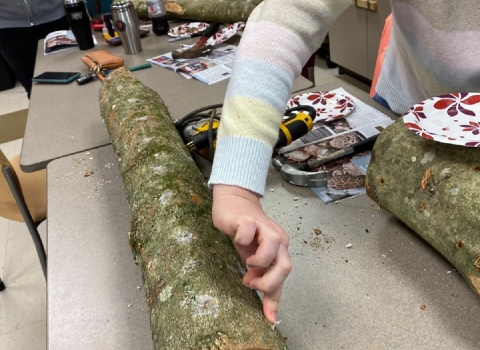