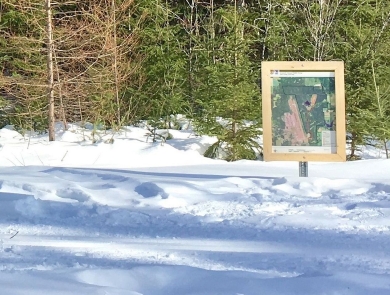 Recreation
A Most Wonderful Time of the Year
Poet Robert Frost wrote: “You can’t get too much winter in the winter.” If you enjoy clean, crisp air and the great outdoors, winter is a special time of year at national wildlife refuges in northern latitudes.
Dec 19, 2018

Learn more about national wildlife refuge . You can check out the visitor center to learn about prairies, wetlands, and the people that help conserve them. You can walk the trails and look for wildlife. You can start birdwatching or add a bird to your life list. You can learn bird songs. You can take photographs of flowers, trees, a pelican, or maybe even an eagle. You can get a bird's eye view of the Refuge and surrounding area by climbing the 110-foot tall tower. You can try fishing through the ice or hunt deer using a bow and arrow, an old-fashioned muzzleloader, or a modern rifle. You could try your hand at drawing, painting, or nature journaling if you bring a sketch pad or journal. You can learn what a leopard frog sounds like or look for snakes. There are so many places to explore and things to discover at Waubay National Wildlife Refuge - we hope you'll plan on visiting more than once.

The Refuge includes 4,650 acres of lakes, marshes, grasslands, and woodlands which support diverse and abundant wildlife. "Waubay" is an English corruption of the Lakota word "wa-ma" or "wa-be" meaning, "where wildfowl build their nests." There couldn't be a better name for this Refuge, where people have observed 245 species of birds, and more than 100 species of birds nest here. Both eastern and western bird species of the United States can be found here. Waubay is also at the southern end of the breeding range of red-necked grebes and LeConte's sparrows and at the northern edge of red-bellied woodpeckers, northern cardinals, and yellow-billed cuckoos.

The main habitats at Waubay National Wildlife Refuge include wetlands, woodlands and grasslands. The main goals for habitat and wildlife management are:

These goals are achieved using a variety of tools and techniques, which include grazing, prescribed burning, restoration, haying, weed management, and rest when appropriate. Refuge staff constantly strive to maintain or improve refuge lands for the benefit of the wildlife. Many factors complicate the work including surrounding habitat (or lack of), size of tract, insufficient science or data, local weather conditions, as well as climate and landscape changes.