As Spring is starting to awaken from its winter nap here at the Monte Vista National Wildlife Refuge, the Greater Sandhill Cranes are starting to wind down their seasonal migration through the San Luis Valley. Only a few short weeks ago, thousands of cranes, (~ 23,000), 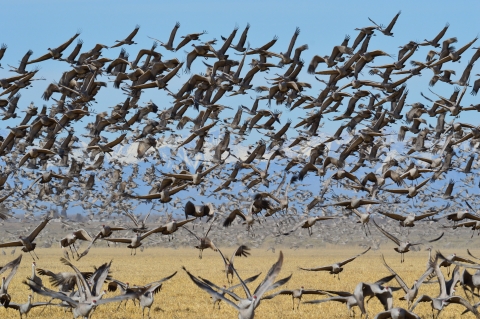 occupied the wetlands and agriculture fields on the refuge; foraging for barley grain to fuel their migration and forming pair bonds with potential mates.  Even though the cranes have almost disappeared from the valleys landscape, there are still cranes to be viewed.  There is an estimated 1000 -1500 cranes still roasting on the Wildlife Drive and along the Hwy 15 Observation Pullouts.  The best times to view these cranes are right at first light and again around sunset.

Other migrators are also arriving on the Monte Vista Refuge such as, waterfowl, shorebirds, and raptors.  Keep an eye out for baby owlets peaking over the crest of their nests.