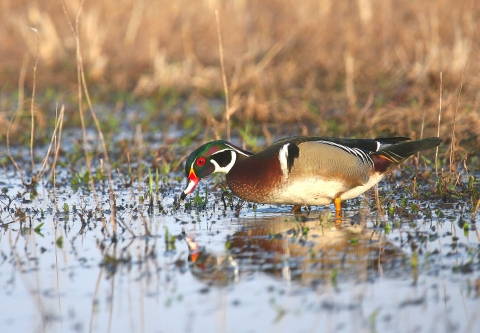 Moist-soil habitats are an integral part of managing public wetlands for waterfowl as these food resources are provided in large part only on State and Federal lands. Lower Hatchie Refuge and the associated river floodplain are capable of supplying food resources such as barnyard grass, sprangletop, smartweeds, rice cut-grass, and a host of other beneficial herbaceous plant species. The refuge provides early successional habitats which play a key role in the migration patterns of mid-continent waterfowl and other migratory birds. The refuge’s present and future will, in large part, be influenced by resource management, which actively benefits waterfowl, including moist soil-habitat. The management of the refuge’s moist-soil units will continue to address habitat issues, which affect migratory bird populations, in keeping with refuge goals and establishing purposes.

There are approximately 1,256 acres of agriculture/moist-soil open lands at Lower Hatchie Refuge. In any given year, approximately 50 percent of these lands are managed for agricultural production and 50 percent are managed for moist soil, although the ratio varies from year-to-year due to river flooding and other factors. Croplands are managed under cooperative agreements with local farmers, who grow corn, soybeans, and winter wheat in rotation. 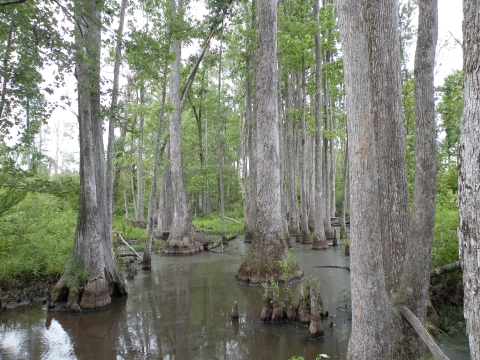 25 million acres of bottomland hardwood forests once dominated the Lower Mississippi Alluvial Valley.  Today, over 95% of this important wetland habitat has been cleared for agriculture and other purposes.   Due to the previous destruction of bottomland hardwood forests, the Hatchie NWR plants corn to replace the valuable acorns that were once an essential food in our area for migratory waterfowl. 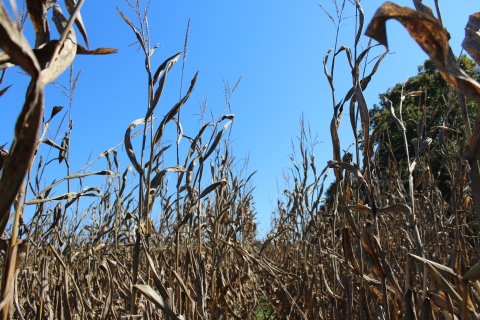 Agricultural crops play an important role in the scheme of migratory bird management, as they provide a source of high-energy carbohydrates needed during periods of cold weather.  Typically, refuges rotate crops and moist soils to ensure a readily available source of food for wildlife, and to meet refuge objectives set forth in the West Tennessee National Wildlife Refuges Conservation Plan.  Acreage varies from year to year, based on management needs.  These crops are left standing in the fields and provide supplemental forage for resident and migratory wildlife, specifically migratory waterfowl.

The refuges' farming program will continue to address the lack of habitat issues that affect migratory bird populations.

The West Tennessee Refuges Complex manages over 3,000 acres of waterfowl impoundments, and approximately 52,000 acres of bottomland hardwoods and permanent water, which provide the necessary food resources and other habitats required by waterfowl.  These Tennessee refuges are located on the northern edge of the wintering grounds, and host several species of ducks and geese from October through March.  During this period, selected areas are surveyed once every two weeks from the ground; however, once per year each refuge is surveyed from the air to ensure that birds in inaccessible areas are counted and to contribute waterfowl survey numbers to the nationwide Mid-Winter Waterfowl Survey. The purpose of these surveys is to document the number of waterfowl species observed as well as the number of birds utilizing the refuges, and to help natural resource professionals understand the continually changing migration patterns of waterfowl.

Many times we are asked as to how we count waterfowl. Counting large numbers of birds is a skill that is developed over many years, and is mentored from one biologist to another.  Initially, an inexperienced observer is taught to recognize what a small number of birds looks like, and then to increase that number incrementally.  For example, a surveyor learns what five birds look like, then ten birds, all the way up to one thousand birds.  Realistically, as the number of birds to be counted rises, so does the margin of error, as it is much more accurate to count five birds than to count one thousand birds.  Thus, waterfowl survey numbers are simply estimates which are highly influenced by the bias and expertise of the observer.   Generally, birds do not gather in large concentrations, but are scattered in smaller groups over several impoundments.  Because the birds are in smaller groups, the count is more accurate as the surveyor counts the birds in each impoundment and then combines the totals to arrive at a final number.  However, with extremely large numbers, such as the estimated 90,000 ducks observed sitting together within the West Tennessee NWR Complex in 2010, the surveyor counts in one thousand duck blocks and then totals the number of blocks.   Ultimately, the most important information derived from these surveys is not the actual number of birds, but the population trend, as managers need to know if bird numbers are increasing or declining, not only within one year, but also from year to year.