Refuges deploy a host of scientifically sound management tools to address biological challenges. These tools span active water management to wilderness character monitoring, all aimed at ensuring a balanced conservation approach to benefit both wildlife and people. Management strategies vary depending upon the habitat type, but the main goal for all habitats is to restore native prairie and to create temporally and spatially dynamic habitat conditions that will attract most breeding bird species and other vertebrate fauna characteristic of the mid-1800s era.

J. Clark Salyer National Wildlife Refuge staff use a variety of tools to manage Refuge lands. To provide the widest variety of quality wetland habitat for hundreds of thousands of migratory birds, Refuge staff manage water levels to maintain everything from wet soils to deep water conditions. This encourages growth of nutritious plants and other organisms and helps prevent cattails from over-growing the marshes. Historically, the natural combination of wildfire and bison grazing maintained the grasslands in this area. Today, Refuge staff use a combination of haying, grazing, mowing, prescribed burning, spraying, and biological agents to control noxious weeds and prevent the invasion of grasslands by shrubs. In addition, some areas of the Refuge that were farmed prior to Refuge establishment are being restored back to grasslands. The restoration process begins by farming these areas again for several years. Farming helps eliminate noxious weeds, reconditions the soil, and provides temporary food for wildlife. Eventually, grasses are re-established on the land.

As technology advances many other methods have been used to track banded ducks and others species in real time. Biologists implant or attach micro GPS or cellular and radio telemetry devices on water birds to record where they travel and how they behave on the way.

In recent years, a stronger emphasis has been placed on obtaining waterfowl information, thus increasing the number of birds banded each year. Mallard, northern pintail, and widgeon are the most numerous species banded.

Picture a cool September morning. You're awakened by the annoying buzz of your alarm clock. It reads 4:30 am. As you struggle to get dressed, your mind wonders about the day ahead. You step out into the darkness, only your breath is visible. Duck banding season has begun.

Moments later, you find yourself huddling in a duck blind, trying to keep warm. Sunrise is still a couple hours away. As you peer through your binoculars, you notice a large number of ducks approaching the shore. For the past few days, the site has been baited with barley to insure a good catch for today's banding. Eager to eat, the unsuspecting ducks continue to make their way. At the precise moment, when the largest number of ducks is feeding, a button is pressed. Rockets ignite, carrying nets over the ducks to trap them. Refuge trucks and personnel rush to the site to prevent ducks from escaping or injuring themselves. 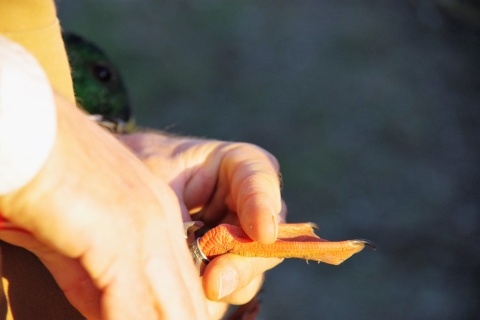 The ducks, sometimes up to 800, are transferred from the nets into holding crates where they wait to be banded. One by one, the ducks are removed from the crates. Biologists and other Refuge personnel first determine the species, age, and sex of the duck. Special tools are used to secure an aluminum band around the leg of the duck. The duck is then released.

These bands provide valuable information such as where the ducks go when they leave the nesting grounds, how long they live, and often where and how they died. Much of this information comes from bands returned by hunters. When a hunter shoots a banded duck, he or she can send the band number to the U. S. Fish and Wildlife Service and receive a special certificate. This certificate will tell what kind of duck it is (species), what sex it is (male or female), where it was banded, and how old it was when banded. Hunters often cherish these bands as rare treasures of pleasant times spent with family and friends, enjoying the beauty of the outdoors.

Refuge managers use haying to restore and maintain extensive examples of plant communities dominated by native flora characteristic of seasonally flooded meadows within the Souris River floodplain. These meadows attract grassland and wetland dependent bird species and other wildlife. Haying/mowing within the meadows sets back woody tree encroachment (mainly willows) and opens up the cattail edge around oxbows and wetlands.

Local cooperators can participate in a hay lottery every 4 years where hay units are assigned using a lottery system. Cooperators are responsible for the terms of the haying contract, which includes the management of noxious weeds through haying/mowing and chemical application. If you are interested in more information about our haying program, please contact us.

One strategy to restore native vegetation throughout the Refuge includes using a combination of grazing and prescribed fire. An ideal management sequence over 5 years might be BGGGR, where B = burn, G = graze, and R = rest. Grazing is primarily used during May through August or September, via a rotation approach with many relatively small grazing cells per unit and short grazing periods per cell. Stocking rates are adjusted to facilitate re-grazing of individual smooth brome plants at least once within a grazing period and livestock are moved to the next cell before native plants are re-grazed.

Local cooperators are given permits to graze Refuge units. If you would like more information about our grazing program or are interested in becoming a cooperator, please contact us.

Refuge staff use a combination of chemical, mechanical, and biological treatments to help control invasive species invasive species
An invasive species is any plant or animal that has spread or been introduced into a new area where they are, or could, cause harm to the environment, economy, or human, animal, or plant health. Their unwelcome presence can destroy ecosystems and cost millions of dollars.

North America’s grassland biome is the continent’s most endangered major ecosystem. The decline in extent and quality of North American prairies coincides with decreasing populations of many animal species that depend on them and is among the most challenging conservation issues of this century. In states and provinces of the northern prairie region, for example, native prairie has declined 30% to 99% due mainly to conversion for agriculture. Roughly 222,000 acres of native mixed-grass and tallgrass prairie are managed by the U.S. Fish and Wildlife Service in North Dakota and South Dakota. These areas range from small isolated 40 acre grasslands surrounded by cropland to large contiguous areas like J. Clark Salyer National Wildlife Refuge.

Prairies in the northern Great Plains evolved with interacting grazing (by bison, elk, antelope, small mammals, and insects) and fire disturbances (started by lightning and Native Americans). These events, along with drought, shaped grassland plant and animal communities. Woodland and forest, for example, were relatively uncommon before homesteading of North Dakotas vast grasslands. Before this European settlement of North Dakota, fires were common during all months of the year, reoccurring roughly every 5–10 years in our area – this kept grassland mostly free from trees. These natural disturbances ended by the early 1900s, however, when bison were extirpated and most prairie fires were suppressed.

Today, prescribed fire and prescribed grazing (by cattle) are used by refuge managers to mimic or recreate natural events by bison and Native Americans that occurred before 1900. Annually, about 25,000-50,000 acres of grassland are periodically burned on national wildlife refuges in the Dakotas and eastern Montana. Fire is used primarily to maintain or improve habitat for wildlife, restore native vegetation, and reduce accumulated fuels (dead vegetation) associated with catastrophic wildfire.

To provide the widest variety of quality wetland habitat for hundreds of thousands of migratory birds, Refuge staff manage water levels to maintain everything from wet soils to deep water conditions. This encourages growth of nutritious plants and other organisms and helps prevent cattails from over-growing the marshes.

Historically, the natural combination of wildfire and bison grazing maintained the grasslands in this area. Today, Refuge staff use a combination of haying, grazing, mowing, prescribed burning, spraying, and biological agents to control noxious weeds and prevent the invasion of grasslands by shrubs.

In addition, some areas of the Refuge that were farmed prior to Refuge establishment are being restored back to grasslands. The restoration process begins by farming these areas again for several years. Farming helps eliminate noxious weeds, reconditions the soil, and provides temporary food for wildlife. Eventually, grasses are re-established on the land.

The U.S. Fish and Wildlife Service issues permits under various wildlife law and treaties. Permits enable the public to engage in legitimate wildlife-related activities that would otherwise be prohibited by law. Service permit programs ensure that such activities are carried out in a manner that safeguards wildlife.  Additionally, some permits promote conservation efforts by authorizing scientific research, generating data, or allowing wildlife management and rehabilitation activities.

If you witness or suspect a wildlife violation, please report it to the:

The Refuge is open to hunting in accordance with State and Refuge-specific regulations. Species open to hunting include deer, fox, grouse, moose, partridge, pheasant, turkey, and waterfowl (coot, duck, goose, and merganser). To provide an enjoyable hunting experience and ensure the safety of all visitors, please familiarize yourself with the following information and regulations.

Vehicle and bicycle travel is restricted to public roads.

When parked, vehicles should not block gates.

The use of ATVs, UTVs, ORVs, OHVs, snowmobiles, amphibious vehicles, and other off-road vehicles is not allowed.