Lying at the tip of the Delmarva Peninsula, the Eastern Shore of Virginia and Fisherman Island National Wildlife Refuges are part of a national system of lands managed to ensure the future of wildlife and its habitats. These refuges serve as one of the country’s most valuable stopovers for migratory birds. Nestled between the Atlantic Ocean and Chesapeake Bay, the refuges include a variety of habitats such as maritime forest, shrub thickets, grasslands, beaches, and tidal wetlands. These habitats provide a vital link for millions of songbirds, raptors, shorebirds, and butterflies to rest and refuel before continuing the rigorous journey to their wintering grounds.

Future conservation efforts lie in the refuges’ commitment to protecting and enhancing the migration corridor through preserving, acquiring, and revegetating hardwood, shrub, and grassland areas. Alliances with nearby landowners will increase available habitat and research will focus on augmenting our knowledge to make biologically sound management decisions. The thousands of people who annually visit this gateway to the Eastern Shore of Virginia will gain an appreciation of the refuges’ unique ecological role. In partnership with the local community, the refuges will also promote the area as a regional tourist destination that contributes to the economic stability of and enhances the quality of life on the Eastern Shore of Virginia. Visitors will leave with an understanding that this place of  incredible diversity and ecological importance is part of a larger network of protected lands within the National Wildlife Refuge System, set aside specifically for wildlife. 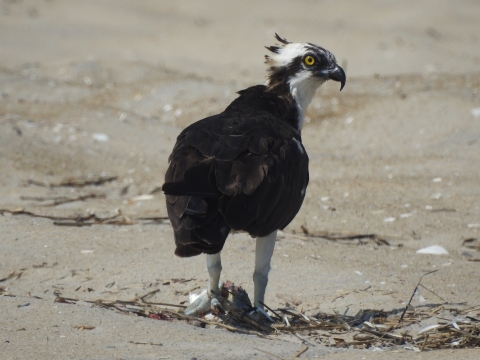 Written history of the area dates back to the earliest colonial times, when refuge uplands were farmed and wetlands and waters were hunted and fished. In the early 1600's, Captain John Smith described the area that is the refuge as: "...a faire Bay compassed but for the mouth with fruitful and delightsome land... Heaven and earth never agreed better to frame a place for man's habitation."

Military Presence
Before becoming a haven for millions of migratory birds, fluttering monarch butterflies and resting raptors, Eastern Shore of Virginia National Wildlife Refuge was Fort John Custis, named after a prominent eighteenth century resident of Northampton County. The strategic location at the mouth of the Chesapeake Bay encouraged military uses of the area in the years before the refuge was established. After World War II, the federal government acquired the land that is now the refuge. During the war, large bunkers housed 16-inch guns designed to protect naval bases and shipyards in Virginia Beach and Norfolk. In 1950, the U.S. Air Force acquired Fort John Custis, renaming it the Cape Charles Air Force Station. Radar towers and additional buildings were built by the Air Force, which occupied the area until 1981.

If this barrel could talk, oh the stories it could tell. Barrel #393 was manufactured in 1943 at the Washington Navy Yard and placed in service on the U.S.S. Missouri, BB 63, (Mighty Mo). The first recorded date the barrel was onboard the ship was May 16, 1945 as the left gun on the rear turret #3. It was on board the Mighty Mo at the time of the Japanese surrender on September 2, 1945. Though this barrel only joined the Mighty Mo during the last four months of World War II, it was used during the entire Korean War. The Navy records every shot fired through each particular barrel to determine its wear. This report is called a Navy Star Gauge Report. For instance, The Star Gauge Report on May 16, 1945 shows barrel #393 fired 10 times at 2500 feet per second (fps); two times at 2690 fps; 10 times at 1800 fps and 25 times at 1900 fps. The last Star Gauge Report we have found is dated May 25, 1953 and shows that barrel #393 fired 31 times at 2690 fps and 149 times at 2075 fps. How fast is that? When the gun was fired at 2690 fps, the projectile traveled one mile in two seconds. Sometime between the date of this last Star Gauge Report and the next Star Gauge Report on August 9, 1954 all of the barrels on the Mighty Mo were replaced. The used barrels were off loaded and barrel #393 was stored at the St. Julien’s Creek Annex Navy Yard in Portsmouth, Virginia. It looked as though barrel #393’s influence in this world had come to an end, but it turns out it hadn’t reached its final resting ground!

We are managed as part of the Chincoteague National Wildlife Refuge Complex. Located on the Eastern Shore of Virginia, this group of sites protect similar habitat types and wildlife. This means common management needs can be applied toward a common purpose throughout the Complex.