Understanding the populations of both bald eagles and golden eagles is the biological basis for the Service's regulatory management framework.

The Bald and Golden Eagle Protection Act explicitly identifies incidental take of eagles as a prohibited act, and the authorization of incidental take is one of the cases where permits may be issued. However, Congress specified that the Service’s authority to permit take requires a determination that the take is compatible with the preservation of the eagle species being taken. Thus, the Service has to make scientific determinations regarding the sustainability of any take of eagles that it authorizes. To do this, the Service needs to know the approximate status of both bald eagle and golden eagle populations. We therefore monitor the populations of bald and golden eagles, provide updated information on population size, productivity, and survival rates, and manage the effects of both authorized and unauthorized take on eagles.

The Service compiled information on the population status and trends of bald eagles and golden eagles up to 2016. The report, Bald and Golden Eagles: Population demographics and estimation of sustainable take in the United States, 2016 update, provides estimated population sizes, productivity, and survival rates. This information was used in the environmental analyses for the Service’s Programmatic Environmental Impact Statement, which was finalized in December 2016. In the Programmatic Environmental Impact Statement, the Service committed to updating population size estimates and take limits for both bald and golden eagles no less than once every six years. 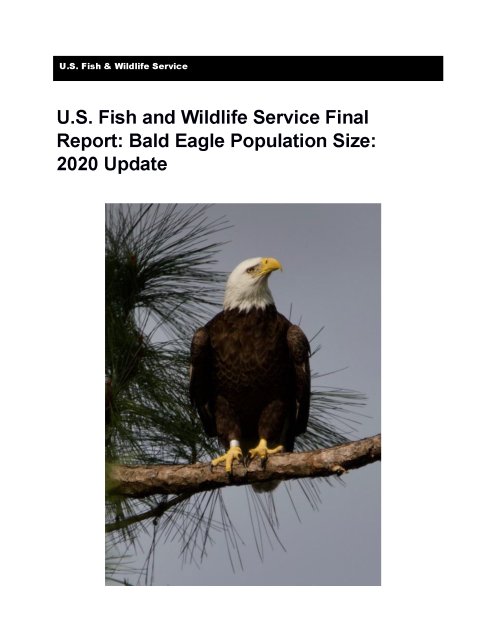 You can also read our feature story on the new bald eagle population estimate.

The updated population estimate was recently published in the scientific journal Ecological Applications.

The Service will continue to monitor golden eagle populations, paying close attention to any signs of population decline. In addition, the Service and many collaborators are carefully considering how to reduce the amount of human-caused mortality the species faces.

Name
Population Demographics and Estimation of Sustainable Take in the United States, 2016 update

This 2016 report is a compilation of the research on the population status and trends of bald and golden eagles up to 2016. The report estimated population sizes, productivity, and survival rates; cumulative effects to local area populations; and effects of unauthorized take of golden eagles....

The U.S. Fish and Wildlife Service published a technical report titled “Bald Eagle Population Size: 2020 Update.” In this technical update, the Service provided the newest estimates for the bald eagle population in the lower 48 states, totaling 316,700 individuals, which includes 71,467 occupied...

These are the frequently asked questions prepared for the announcement of the technical report titled “Bald Eagle Population Size: 2020 Update.”

This report is a technical update of the scientific information for bald eagles published in the Service’s Programmatic Environmental Impact Statement (PEIS), which was finalized in December 2016. In the PEIS, the Service committed to updating population size estimates and take...

These are the frequently asked questions to help explain the Bald Eagle Sustainable Take Technical Report.

Eagle Management Program
Forty years ago, our national symbol, the bald eagle, was in danger of extinction throughout most of its range. Habitat destruction and degradation, illegal shooting, and the contamination of its food source, largely as a consequence of DDT, decimated the eagle population. Habitat protection...
Program