Invasive species are non-native plants, animals and other living organisms that thrive in areas where they don’t naturally live and cause (or are likely to cause) economic or environmental harm, or harm to human, animal or plant health. Invasive species degrade, change or displace native habitats, compete with native wildlife, and are major threats to biodiversity.

The origin and effects of invasive species vary. Many invasive species are spread or introduced accidentally, on the hulls of boats or soles of shoes, for example. Some are purposely acquired pets or garden trees or flowers that end up in the wild. Invasive fish and wildlife can prey on native animals and outcompete them for food and habitat. Invasive plants can outcompete native vegetation for space, moisture, sunlight and soil nutrients.

Although invasive species occur on all continents, islands experience disproportionate impacts. Islands make up just 5.3 percent of Earth’s land area, but they are biodiversity hot spots — home to a host of species. Unfortunately, islands also see the greatest concentration of species extinctions. About 75 percent of all reptile, bird, amphibian and mammal extinctions have occurred on islands. Invasive species have played a role in most of them. 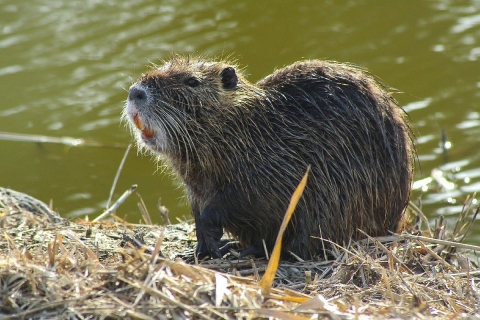 Nutria
Nutria, native to South America, are large, plant-eating semi-aquatic rodents sharing some characteristics with beavers and muskrats. Since their introduction to the United States, nutria have chewed up  marshlands. This destructiveness has been exceptionally evident at Blackwater National Wildlife Refuge in Maryland. Nutria also damage agricultural crops and infrastructure (e.g., levees) and carry several pathogens and parasites that can be transmitted to humans, livestock and pets. 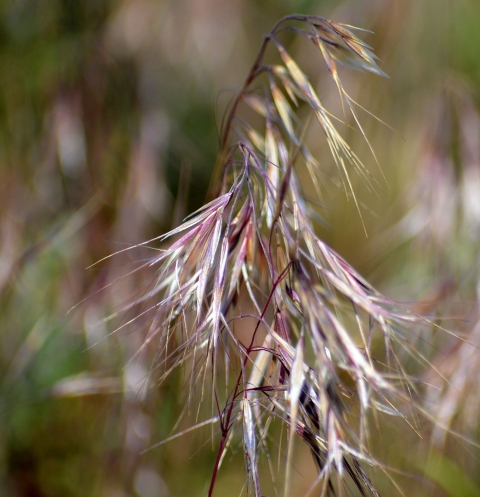 Cheatgrass
Cheatgrass is an introduced annual grass native to parts of Europe, Africa and Asia. It invades sagebrush sagebrush
The western United States’ sagebrush country encompasses over 175 million acres of public and private lands. The sagebrush landscape provides many benefits to our rural economies and communities, and it serves as crucial habitat for a diversity of wildlife, including the iconic greater sage-grouse and over 350 other species.

Learn more about sagebrush , pinyon-juniper, ponderosa pine, mountain brush and other rangeland and forests of the western United States. When it becomes dense and dominant, cheatgrass can alter the historic fire pattern in large, interconnected habitats. After wildfire, cheatgrass thrives and can outcompete native seedlings. Cheatgrass can also diminish recreational opportunities and decrease land values. 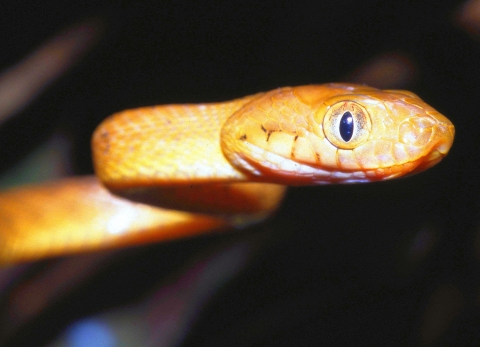 Brown treesnake
The brown treesnake is native to parts of Indonesia, the Solomon Islands, New Guinea and Australia. The snake was first sighted on the Pacific island of Guam in the 1950s, feeding on lizards, birds, small mammals and eggs. Treesnakes have spread rapidly and wiped out most of Guam’s native forest birds. They also crawl on electrical lines, causing expensive power outages and electrical damage. 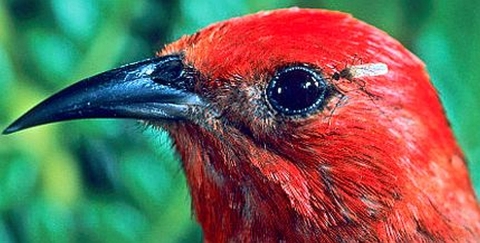 Mosquitoes
Many non-native mosquitoes found in the United States harm native wildlife and humans. For example, the southern house mosquito — inadvertently introduced to Hawaii —is now the primary spreader of avian malaria and avian pox. The diseases have played a hand in the extinction and decline of many native Hawaiian forest birds, including the ‘apapane, shown here with a mosquito near its eye. 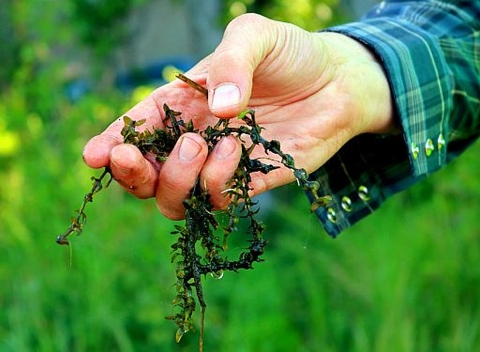 Elodea
Elodea, or Canadian waterweed, is native to much of North America but is invasive in Alaska. Elodea grows in long, trailing stems of light green leaves that form tangled masses in shallow lakes, sloughs, rivers and bays. It can block passage of salmon and other fish, as well as clog boat launches, float plane access points and subsistence hunting areas. 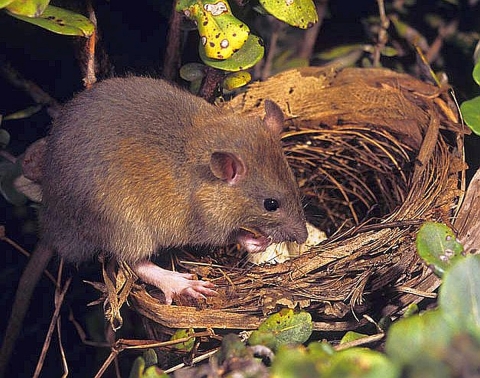 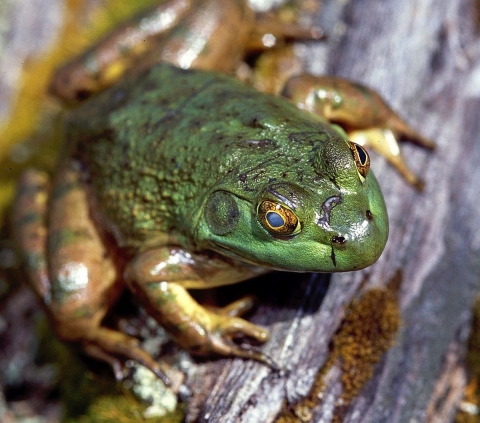 American bullfrog
Native to the eastern United States and Canada, the American bullfrog is establishing itself around the world as an invasive species that easily outcompetes many native animals. Mature bullfrogs may weigh more than two pounds and are opportunistic predators. They eat most anything, including insects, snakes, lizards, turtles, frogs, fish, rodents, bats and birds.

Feral Swine
Feral swine — escaped domestic pigs, Eurasian wild boars and hybrids of the two — are extremely destructive. In the United States, they number more than 6 million and are found in at least 38 states or territories. Feral swine root up, trample and eat cropland and property, including cultural and historic resources. They prey on ground nesting birds, amphibians, reptiles and other wildlife. They can carry at least 30 viral and bacterial diseases.

In 2019 we provided 2,350 invasive species prevention signs for boat ramps and trailheads on wildlife refuges, hatcheries and U.S. Fish and Wildlife Service administrative sites. The signs alert the public about invasive species and how to prevent their spread.

Learn more about national wildlife refuge lands and waters from 5 to 14. These teams carry out invasive species prevention, early detection and rapid-response activities.

We eradicated invasive black rats in 2012 from Palmyra Atoll National Wildlife Refuge in the Pacific. The rats were devastating native plants, seabirds and invertebrates. Since the eradication, population sizes and reproductive success have increased for native tree species, seabirds and crabs. The entire population of the invasive tiger mosquito, which relied on rats for its blood meals, has disappeared. Increases in seabird numbers have meant increases in guano production, which translates into greater nutrients for the coral reef system.

We are in the process of confirming a successful eradication of nutria at Maryland’s Blackwater National Wildlife Refuge and Chesapeake Bay. Nutria were devouring the roots of native marsh plants that keep the marsh healthy and intact. The marsh is slowly recovering. The nutria eradication benefits all plants and animals that use marsh habitat and protects shorelines from sea-level rise and storms.

We removed invasive feral horses and burros at Nevada’s Sheldon National Wildlife Refuge. The removal has led to the recovery of thousands of acres of upland and streamside habitat, improving water quality and quantity in desert springs and benefiting sage grouse, threatened Lahontan cutthroat trout and other fish and wildlife.

We eradicated invasive black rats at Desecheo National Wildlife Refuge in Puerto Rico. The rats were devastating native species and the ecosystem. Many native species are now recovering, including the Desecheo dwarf gecko, the slippery backed mabuya, the Puerto Rican racer and the threatened cactus, higo chumbo.

We have eradicated 99 percent of invasive Verbesina encelioides (golden crownbeard) plants at Midway Atoll National Wildlife Refuge in the Pacific. This has benefited the largest nesting colonies of Laysan and black-footed albatrosses on the planet, as well as endangered short-tailed albatrosses, Laysan ducks and many other seabirds and native plants.

In 2023, we will begin a project to eradicate 99 percent of invasive carp at North Carolina’s Mattamuskeet National Wildlife Refuge. The effort will help restore the native submerged aquatic vegetation that provides food for the lake’s fish, waterfowl and other native wildlife.

Partnerships are critical in our work, allowing us to leverage resources and work more strategically. In 2015, we developed an Island Restoration Memorandum of Understanding to work to eradicate invasive species from islands and restore them. Partners include Island Conservation, the Department of Agriculture’s Animal and Plant Health Inspection Service Wildlife Services program, American Bird Conservancy, The Nature Conservancy and the National Park Service. In 2020, we established the National Invasive Species Prevention Memorandum of Understanding with the North American Invasive Species Management Association, Wildlife Forever and the National Park Service to prevent the introduction and spread of invasive species onto federal lands and waters and beyond.

How You Can Help

These are among the laws and regulations guide U.S. Fish and Wildlife Service invasive species invasive species
An invasive species is any plant or animal that has spread or been introduced into a new area where they are, or could, cause harm to the environment, economy, or human, animal, or plant health. Their unwelcome presence can destroy ecosystems and cost millions of dollars.

The Lacey Act, as amended in 1981 and 2008, prohibits the importation, exportation, transportation, sale, receipt, acquisition, or purchase of any fish or wildlife or plant taken, possessed, transported, or sold in violation of any law, treaty, or regulation of the United States or any Indian...

The Nutria Eradication and Control Act provides for the States of Maryland and Louisiana to implement nutria eradication or control measures and restore marshland damaged by nutria.

Executive Order 13751, issued in 2016, ensures the faithful execution of the laws of the United States of America to prevent the introduction of invasive species and provide for their control, and to minimize the economic, plant, animal, ecological and human health impacts that invasive species...

The Clean Vessel Act of 1992 allows the Secretary of the Interior to issue grants to coastal and inland states for pump-out stations and waste reception facilities to dispose of recreational boater sewage.

The Alien Species Prevention Enforcement Act of 1992 requires the Secretary of Agriculture to work with the Department of Interior, the Postal Service, and the State of Hawaii to operate a program to protect the State of Hawaii from the introduction of prohibited plants, plant pests and...

The National Invasive Species Act of 1996 amends the Nonindigenous Aquatic Nuisance Prevention and Control Act of 1990 to mandate regulations to prevent the introduction and spread of aquatic nuisance species into the Great Lakes through ballast water.

The Animal Damage Control Act of 1931 provided broad authority for investigation, demonstrations and control of mammalian predators, rodents and birds. P.L. 99-19, approved in 1985, transferred administration of the act from the Secretary of the Interior to the Secretary of Agriculture. P.L. 102...

The Federal Noxious Weed Act, enacted in 1975, established a federal program to control the spread of noxious weeds. The Secretary of Agriculture was given the authority to designate plants as noxious weeds by regulation, and the movement of all such weeds in interstate or foreign commerce was...

This act authorizes the Secretaries of the Department of Agriculture and the Department of the Interior, with respect to matters under their respective jurisdictions, to provide for the control and eradication of the brown treesnake on the island of Guam and reduce the risk of the introduction...