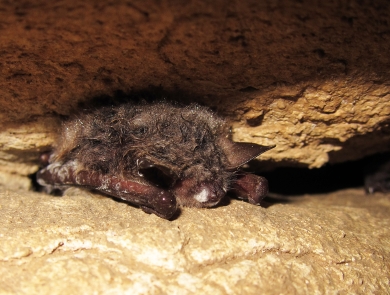 Proposal to reclassify northern long-eared bat as endangered
The U.S. Fish and Wildlife Service today announced a proposal to reclassify the northern long-eared bat as endangered under the Endangered Species Act. The bat, currently listed as threatened, faces extinction due to the range-wide impacts of white-nose syndrome, a deadly disease affecting cave-...
Mar 22, 2022
View All News

The North Dakota Ecological Services Field Office is responsible for implementing the Endangered Species Act throughout North Dakota.  Our office works in partnership with federal and state agencies and Tribes to conserve and recover species and habitats.

The North Dakota Field Office is part of the U.S. Fish and Wildlife Service’s Ecological Services Program.  We implement reviews of Federal construction projects, endangered species planning and recovery efforts, environmental contaminants research and remediation, habitat restoration and conservation planning assistance, through a variety of conservation partnerships and administration of grants.  Below are the national program pages for programs conducted by our office - for North Dakota specific information for consultations, please visit the "What We Do" tab, above.

Endangered Species
We provide national leadership in the recovery and conservation of our nation's imperiled plant and animal species, working with experts in the scientific community to identify species on the verge of extinction and to build the road to recovery to bring them back. We work with a range of public...
Program
Baileys Crossroads, VA

Recovery
We work with partners to conserve the ecosystems upon which endangered species and threatened species depend, developing and maintaining conservation programs for these species to improve their status to the point that Endangered Species Act protection is no longer necessary for survival. This...
Program
Baileys Crossroads, VA

The North Dakota Ecological Services Field Office's priority is the protection, conservation, and recovery of our nation's most imperiled species and the habitats they depend upon.  North Dakota has ten species listed under the Endangered Species Act. Listed species are either "threatened" - likely to become endangered in the foreseeable future, or "endangered" - in danger of extinction throughout all or a significant portion of its range.

Our office works in partnership with others to protect and recover threatened and endangered species and their habitats to ensure their continued existence.  We also work to conserve species "at-risk" of becoming threatened or endangered by promoting conservation efforts so that protection under the Endangered Species Act is not needed.  Additionally, several bird and eagle species, both migratory and resident populations found in North Dakota, warrant federal protection under the Migratory Bird Treaty Act and Bald and Golden Eagle Protection Act.  We prioritize our efforts on the protection, conservation, and recovery of all these species.

Learn more about the species that are the focus of our conservation efforts:

The pallid sturgeon was first recognized as a species different from shovelnose sturgeon by S. A. Forbes and R. E. Richardson in 1905 based on a study of nine specimens collected from the Mississippi River near Grafton, Illinois (Forbes and Richardson 1905). They named this new species...

The northern long-eared bat is a wide-ranging, federally threatened bat species, found in 37 states and eight provinces in North America. The species typically overwinters in caves or mines and spends the remainder of the year in forested habitats. As its name suggests, the northern long-eared...

Historically, the rusty patched bumble bee was broadly distributed across the eastern United States, Upper Midwest, and southern Quebec and Ontario in Canada. Since 2000, this bumble bee has been reported from only 13 states and 1 Canadian province: Illinois, Indiana, Iowa, Maine, Maryland,...

Grassland pollinators need your help.  In 2022, North Dakota, South Dakota and Kansas will be starting bumblebee atlas work hosted by the Xerces Society.  For more information on how you can join in the effort, please click the box below.