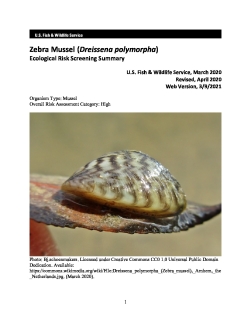 Dreissena polymorpha, the Zebra Mussel, is native to the Black, Caspian, and Azov Seas. This species has been introduced throughout much of Europe and North America. The introduction of this species is a serious threat to our native ecosystems, especially native mussels. It covers native shells and smothers the organism while competing for food. It alters habitats by invading and competing for space and food. Zebra mussels eat large numbers of phytoplankton which affects larval fish and their growth. The mussels can clog up pipes and attach to ship hulls. When they die, their decay can speed up corrosion. Shells are sharp and can cause injury to recreational bathers and shore users. All of these negative impacts mixed with the abundant information available on this species makes it history of invasiveness High. The overall climate match for Dreissena polymorpha in the contiguous United States is High with all States having a high individual Climate 6 score. This species has many currently established populations in the United States. The concern now is the rapid spread of the species. Climate match data indicates that suitable climate for Dreissena polymorpha exists in almost all areas of the United States. All of the information provided and the negative impacts this species has had in its introduced areas makes the certainty of assessment High and the overall risk assessment category High.