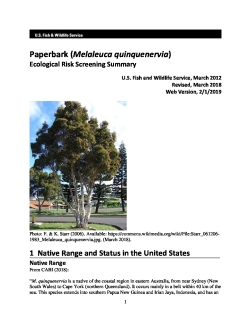 Melaleuca quinquenervia is a tree species native to Tropical Asia, Australasia, and Pacific-New Caledonia. Distribution across the world has greatly expanded from introductions of the species as an ornamental, use as windbreaks, and other agroforestry purposes. While distribution is unclear, M. quinquenervia has been reported in nearly sixty countries across the globe. The species has provided some ecological and economic benefits in some of these areas, but ultimately is considered highly invasive. Impacts include the formation of impenetrable thickets, reduction of biodiversity, displaceplacement of native vegetation, dimishment of habitats for wildlife, loss of groundwater due to increased evapotranspiration, as well as negative social and economic impacts. Currently established in Florida and Louisiana, its presence within the United States poses a direct threat to unique locations such as the Everglades, and a threat to native species within these areas. Climate match within the contiguous United States is high overall and over 30 states could provide favorable habitat. Given the high history of invasiveness, numerous negative impacts of introduction, and high climate match, the overall risk of Melaleuca quinquenervia in the contiguous United States is high.