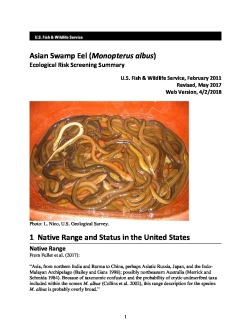 Species that are considered uncertain risk need a more in-depth assessment beyond the Risk Summary to better define the species’ risk to U.S. environments.

Monopterus albus, an eel species with a broad native distribution in Asia, is established in several U.S. locations. In the U.S., the species has not been shown to detrimentally impact native communities or aquaculture, but its burrowing behavior has been reported to damage rice fields in the Philippines and Japan. Without further robust scientific study, the history of invasiveness cannot be rated as “high”. M. albus is a popular food fish among certain communities, and consumption of raw or undercooked M. albus can result in serious parasitic infections. Climate match to the contiguous U.S. is high, with areas of highest match occurring in the southeastern U.S. Overall risk to the contiguous U.S. is uncertain at this time.