Image Details
Since 1871 the National Fish Hatchery system has been at work improving recreational fishing and restoring aquatic species that are in decline, at risk, and are important to the health of our aquatic systems. Across the country, the network of National Fish Hatcheries work with states and tribes to conserve, restore and enhance the fish and aquatic resources of America for future generations

Quinault National Fish Hatchery, in the shadow of Olympic National Park, raises and releases more than three million fish annually. These include Coho and Chum Salmon as well as Winter-run Steelhead Trout. This facility is co-managed by the Quinault Indian Nation, with a primary mission to fulfill the United States treaty obligations. Fish release from this hatchery also benefit the local sport and commercial fisheries as well.

Since 1871 the National Fish Hatchery System has worked to restore aquatic species that are important to the health of our aquatic systems. This country-wide network of national fish hatcheries works with states and tribes to conserve, restore and enhance the fish and aquatic resources of America for future generations.

The Quinault National Fish Hatchery grew out of the cooperation between U.S. Fish & Wildlife Service and the Quinault Indian Nation, in an effort to restore and enhance the depleted salmon and steelhead fish runs on the Quinault Indian reservation and adjacent lands.  Species and quantity reared as well as release times are subject to change based on hatchery evaluation findings, fisheries research, environmental conditions, and consensus between the USFWS managers and the Quinault Indian Nation.  Coho and Chum Salmon, along with Winter-run Steelhead Trout, are currently being reared and released at this facility.

Chum salmon:  (O. keta)  The majority of these fish rush to the hatchery the first two week in November. Female and male adults ready to spawn once they reach the hatchery. About 650 females are needed to collect enough eggs for a fry release of 1.5 million! Once the fry are liberated from the incubation trays, they are fed for about 40 days and then released into Cook Creek. Returning adult Chum salmon range in ages from 3 to 5 years.

Coho salmon (Oncorhynchus kisutch): We also raise and release around 600,000 coho salmon per year. The number of 2 to 3 year-old adults who return to the hatchery each year varies, ranging from a few hundred to over 10,000. Baby coho salmon, or "fry", emerge from incubators in February and remain in our care until late spring, when we release them into the upper Tsoo-Yess River.  These fry will spend an additional year in the river before migrating out to the ocean. Adults begin their migration back to the hatchery as early as September of each year.

Winter-run steelhead:  (O. mykiss) Quinault NFH also raises and releases 190,000 winter-run steelhead for the Quinault Indian Nation. These fish provide important commercial and subsistence fisheries to tribal members and offer quality tribal-guided sport fishing opportunities available to the general public. Yearlings (smolts) are released directly from the rearing ponds into Cook Creek . Adult Steelhead trout begin returning to the hatchery in November and continue to return until January. Approximately 190,000 juveniles are released directly in to Cook Creek in the spring.

View Our Species
View All Projects

Located in the beautiful Olympic Peninsula, Quinault National Fish Hatchery is a popular tourist destination in the area.  Our self-guided visitor center provides helpful and interesting information about our hatchery operations, the fish we rear, and their cultural relevance to the Quinault people.

There are no designated trails on the property, but you're welcome to walk around the facility to see the fish ponds, fish ladder, fish weir, and Cook Creek. 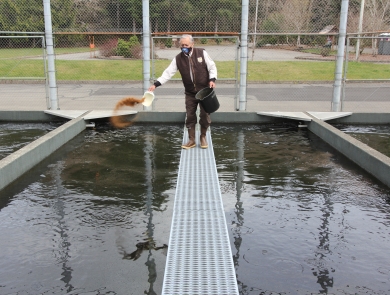 50 Years and Counting!
Quinault National Fish Hatchery employee and Quinault Indian Nation Tribal member Ed Lemieux has surpassed 50 years of employment! Read about how this dedicated fish culturist helped build up the fish production program into the success it is today and how he has create a legacy for his community...
Sep 15, 2022 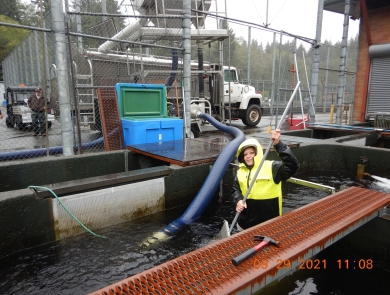 Our People
Jane Lemieux's Journey to Employment
Jane Lemieux was literally raised at Quinault National Fish Hatchery. Now she is a proud employee at this hatchery after gaining critical career building experience there through the Tribal TERO employment program.
Sep 12, 2022
View All News
View Our Library
View More Opportunities