Reflections on a Career in Conservation Law Enforcement

Alaska Native Affairs Specialist Crystal Leonetti sat down with Refuge Law Enforcement Chief Jim Hjelmgren just before his retirement on December 31, 2019. They reflected on his proactive, friendly approach to law enforcement issues in Alaska and how her perspective has changed as she’s gotten to know the people behind the badge.

Jim: Good to see you Crystal.

Crystal: It’s good to be here. Thanks for being here with me. We are here to talk about your career and my career a little bit. You’ve been with the U.S. Fish and Wildlife Service for how many years now?

Jim: For 22 years and then 10 years with the National Park Service before that.

Crystal: Okay. So over 30 years of resource protection and law enforcement. So you’ve seen a few things. I’m just curious about a few of those things. In particular in Alaska.

Crystal: I’ve noticed some really good work you’ve done here with law enforcement and Alaska Native people and I think we’ll just dive right in. What I’ve noticed is that one of your core values in working in rural Alaska with Alaska Native people, or any rural Alaskan, is to spend time there with them…with the people. How did you figure that out?

Jim: That actually came pretty easy, but it took us a while to act on it. So the way it kind of hit me, in a kind of revolutionary way, was we’d go out to a village, we’d go out to the river and meet with folks, and they would be very tentative to talk to law enforcement. And, in fact there’s many times, you know, we were asked to leave.

But what we found is repetitive meetings with folks — even if it was completely unintentional with no focused law enforcement goals —and that familiarization, was the key to success. Keep coming. You know, keep meeting with the same folks. Keep giving them opportunity to ask any question they want. And doing that was the most productive way to form some sort of connection between law enforcement and Alaska Natives, even though many times we were there to talk about real law enforcement/difficult issues.

Crystal: There’s a really instinctive fear of law enforcement among Alaska Native people due to historic trauma caused by numerous methods and means and people across the last few generations. So I can imagine that you encountered that a lot as you as you did your work in rural Alaska.

So after 30 years of resource protection and law enforcement, what is your advice to other law enforcement officers in terms of cross-cultural communication with Alaska Native peoples when there is a core mistrust with law enforcement?

Jim: Yeah, I think it’s…advice is a great word…but it’s one of those things that you have to do. If you want to be successful and you want success on both sides…you want success, well all three sides: success for conservation, for Alaska Natives, and the law enforcement side of things. You want people to work together and try at the end of the day to have the best conservation outcomes that you can possibly have. It’s got to be a baseline, a core DNA attitude from the law enforcement side of things to spend time with people no matter how fun it might not be. It’s just it’s a quintessential fact that I’ve learned.

I’ve worked in areas like, let’s say, in North Dakota and done easement work with folks…you know, angry farmers over wetlands and stuff like that. But even with those guys, the more time I spent with them, they could separate the person from the law a little bit and that little opening right there — once they start to see the law enforcement officer as a human — you can get through the difficult parts after that. You can get through the clunky parts of “I’m sorry. I do have to issue you a citation.” Once you make that human connection that’s not so difficult for either side.

Crystal: What about now that you’re exiting your career and you’re entering the fun part of your life and thinking back on your career, what was it that motivated you to have great success? I mean you kind of you have this “get up and go/Jim Hjelmgren-kind of attitude” that I admire. So what motivates you?

That’s my baseline goal, but connecting with humans who enjoy doing the same things I do is really huge for me. I mean I’ve said it many times to folks in some of the villages: “Gosh. I wish I could have grew up here and you’re going hunting tomorrow? And then next month? And then you’re going fishing again?” That’s like…that’s me. I had to grow up in a city environment — a big city environment — trying to do those things. But that’s the thing I’ve learned: I love the connection to people who enjoy doing the same things I do. For Alaska Natives, it’s even more than just the act. It’s a part of them which I really envy and, in my retirement, it’s going to be more of a part of me…

Crystal: Anything else you’d like to add looking back on your career and kind of a connection with Alaska and Alaska Native people?

Jim: I think the most important thing is we know what works and we know what doesn’t work. And here’s what doesn’t work: You as a law enforcement conservation entity going in and writing tickets and demanding
things and tossing regulations nonstop and closing things down. If that’s the only light you’re ever seen in by the people who do those things, you’re never going to make a connection. You never going to get folks who overtly want to obey the regulations that you hand to them.

So for me, that’s just one of the most important factors. In law enforcement we can’t live without community connections at this point. We’ve seen it. It happens all over the world that law enforcement entities cannot be that, you know…that bully, or seen as the bully. That doesn’t work. They’ve got to be seen as a partner…We all make mistakes. We can get through all those difficult moments when it comes to creating the best conservation outcomes possible.

Crystal: Anything you’d like to ask me about being a Native Liaison?

Crystal: I grew up on the Kenai Peninsula and visited my family in Bristol Bay in the summers going fishing for salmon.

Jim: Okay. And did you know any conservation officers or Alaska wildlife troopers or anybody kind of in the resource law enforcement side of things?

Crystal: Not growing up. In fact, I mean I grew up on a small farm down the peninsula and I didn’t really even know about the U.S. Fish and Wildlife Service as I was a kid growing up…When I first started to learn about law enforcement officers or wildlife law enforcement was when I was a native liaison for another federal agency…My job took me to villages across the state and the stories I heard tribal officials and elders tell were heart wrenching.

I remember one elder telling me his most important implement as a family man, as a community man, was confiscated from him for doing something that he was taught by his father was the right thing to do: the right way to respect the wildlife, the right way to provide for his kids in his community. And it was wrong in somebody else’s eyes and that most important implement — his gun — was confiscated from him. And it made me cry.

Crystal: Sure because when I first came to the U.S. Fish & Wildlife Service in 2010, even though I hadn’t grown up or known any law enforcement officers at that point, I came with a fear and intimidation. I don’t know if it was mental, emotional, or physical, but I had this block from wanting to get to know you and the other law enforcement officers. And even though I’ve never had any direct interaction, the only thing I can attribute that to is the stories I’ve heard and that kind of generational trauma that gets passed down. So yeah, that interaction would have been valuable.

Jim: And so your perspective has changed?

Crystal: Absolutely. Yeah. So the first interaction I had was actually with you, with the law enforcement officers, and you approached me to ask if we could go meet with Father Michael Oleksa, who teaches cross-cultural communication at our Alaska Native Relations class, and I said “Sure!” So I arrange that meeting and we went and ate pizza with Father Michael.

And I didn’t know what it was all about until you started to explain that, when you’re interviewing a suspect for a wildlife crime, there are certain behaviors you’re looking for in a guilty person versus an innocent person.

And all of those behaviors of a guilty person were behaviors that are natural behaviors of communication among Alaska Native people, and, in fact, indigenous people around the globe. And you knew that that was bad that your colleagues were being taught this and would be looking for these behaviors and so you were asking his advice. And “What do we do?” And he said: “We’ve gotta get the word out. We gotta make a video!” And he was so excited. He couldn’t sit still. And you and I we went on along a path and made that video.

And that’s when I became a lot more comfortable with law enforcement officers and recognize there is a person behind the badge.

What do you think people would find most surprising about your job?

The litany of personal and professional critique. It never ends in law enforcement. Everything we do is judged.

How do Alaska’s wild places sustain and invigorate you?

The greatest back-country experiences I’ve had in Alaska, included extreme fatigue and exhaustion. So many times I’ve uttered the words, “never again,” and one day back at home, I’m already planning the next excursion.

Hunting, fishing, crabbing or researching more opportunities to do more of those things.

What’s the greatest misconception visitors have about Alaska?

The lack of understanding of how dangerous back-country Alaska truly is.

What’s your most treasured memory regarding Alaska or your job?

Helping add smiles to faces of Alaska Natives who have dealt with hard times.

What advice would you give people who are interested in a career with the U.S. Fish and Wildlife Service?

More than your natural resource craft, learn how to communicate and build relationships with agency personnel and, even more important, the people you will serve.

What Alaskan animal is most fascinating/inspiring to you and why?

Hands down the most fascinating is the one I am looking to spot at the time. One moment a caribou, the next a bear and the next a goat. If while caribou hunting, I spot a bear, there is not much excitement seeing the bear. Hence, when I’m bear hunting and spot a caribou, the same applies. My fascination hits a 10 when I spot the animal I’m searching for. 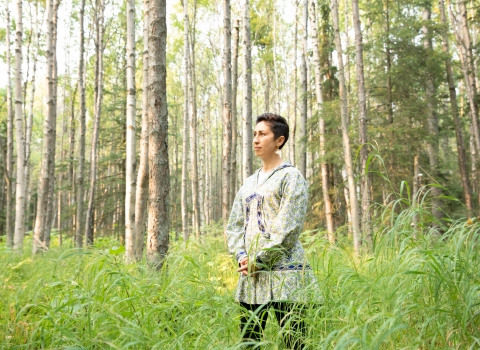 Our People
Healing from the Inside Out