Silver rice rat. Missouri bladderpod. White wartyback pearlymussel. Which of these species need protecting? The short answer is, all of them. We at the U.S. Fish and Wildlife Service know that a healthy environment is essential for all of us – regardless of our zip code. We also know that it takes more than clean air and water to make our world healthy, it takes biodiversity too. From the smallest microbe to the largest plants and animals on Earth, we all need this interdependent system built on the vast network of living things that share our planet. Take a moment to learn how we work across habitats and wider ecosystems by administering the Endangered Species Act.

What is the Endangered Species Act?

This federal law sees beyond the popularity of a species and extends protections to plants and animals, great and small, that are at risk of extinction. Codified in 1973, this act of Congress recognizes that imperiled species have aesthetic, ecological, educational, historical, recreational and scientific value for all of us. The preamble of the Endangered Species Act summarized convincing arguments made by scientists, conservationists and others who were concerned by the disappearance of flora and fauna, a statement that still has global impact today. Our work doesn’t stop with protecting individual species; Congress further stated its intent that the legislation would conserve the ecosystems upon which these species depend as well. This federal law serves as a safety net that slows, then stops the likely journey toward extinction, with the ultimate goal of removing them from protection under the act.

How does the Endangered Species Act benefit people?

Why should you care about an obscure snail, like the Virginia fringed mountain snail, or some tiny crustacean that lives deep in an aquifer, like the scum-eating Illinois cave amphipod? What difference will that make? The simple answer is that Earth’s whole is greater than the sum of its parts. No one knows how the extinction of organisms will affect the other members of its ecosystem, but the removal of a single species can set off a chain reaction affecting many others.

The ecological value of a species is just one consideration. Like a cable knit sweater, removing one plant or animal with known medicinal, economic or ecological value can unravel a whole complex pattern. When we lose a species to extinction, we may be losing solutions to our most pressing problems. If these organisms are destroyed before their unique chemistries are known, their secrets would die with them.

How do species get listed?

How do we decide which species need this special protection? Or when to declare a species recovered? Fortunately, for species like the cave amphipod and the mountain snail, it’s not a popularity contest. All decisions, whether adding a species to the list, crafting recovery strategies or removing a species from the list, are based on the best available science.

For each species, we weigh factors like loss of habitat, disease and predation, and other criteria that help us decide what warrants listing. We also invite you to share information during public comment periods; however, it’s important to note that the comment process is not a simple tally of support. Under the Endangered Species Act, we are required to use valid scientific information to make these decisions. Much like an emergency room, we triage sensitive species given the immediacy and severity of the threats facing them within the limitations presented by budget and staffing.

How does listing help plants and animals?

Plants and animals that are designated as endangered or threatened receive a range of protections under the Endangered Species Act. In general, animals are protected from people intentionally harming, harassing, killing them or destroying their habitat – which is broadly called take. Developing a blueprint for how to stabilize and reverse the threats to these species is key, and we pull in partners from across the government, academia, non-profits and private sectors to achieve recovery goals within formal recovery plans. In addition to protecting habitat, we may recommend actions such as limiting contaminants or reintroducing a species into its former range, depending on specific needs. We don’t do it alone! Getting you involved through citizen science projects also helps us conduct research and monitoring across the given range of a species, large or small.

Recovery of a listed species is a marathon, not a sprint. While it can take years to bring protected species back from the brink, it’s a race we’ve won many times. One of our most well-known successes is the bald eagle. Listed as endangered in 1967 under a precursor to the current Endangered Species Act, bald eagles were removed from this protection after more than three decades of habitat protection, elimination of DDT in the environment and a nationwide concern for its future.

We follow a similar process when we propose to remove protections for listed species, relying on science to assess the health of a species, and using the recovery plan as our guide. Once a species is delisted, states and tribes take over management responsibility, and we monitor the recovered plant or animal for at least 5 years to ensure that they continue to thrive.

Want to get involved?

Many people wonder how they can help imperiled species. One of the best ways is to learn about plants and wildlife in your area. Volunteer to help with monitoring, surveys or other actions, and encourage others to do the same. With your help and support, we can ensure a bright future for our nation’s most sensitive species and the ecosystems upon which we all depend. Find a variety of volunteer opportunities near you! 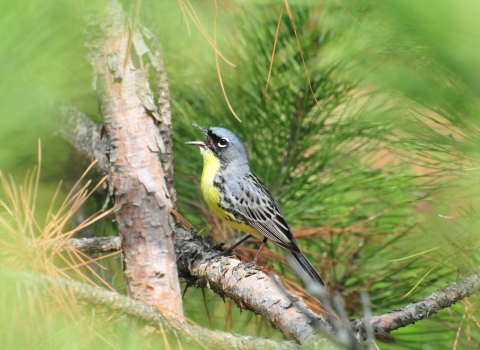