National Wildlife Refuges Along the Trail of Tears

Image Details
National Wildlife Refuges Along the Trail of Tears

In the 1830s, the U.S. government forced tens of thousands of Cherokee, Choctaw, Chickasaw, Seminole and Muskogee tribespeople to move hundreds of miles west from their ancestral homes in the Southeast to present-day Oklahoma. Members of those tribes traveled by foot, horse, wagon, railroad or steamboat along various routes, some of which are now designated as the Trail of Tears National Historic Trail. The network of trails stretches across 5,043 miles in nine states. Many native people died along the way.

Today, several national wildlife refuges are situated roughly along the Trail of Tears. Because rivers have meandered or been dammed and channelized since the late 1830s, the scene along the way today is not precisely what the tribespeople saw. But the obstacles they endured along the trail are embodied in today’s refuge terrain.

“The Trail of Tears is one of the more despicable episodes in this nation’s history,” says Rick Kanaski, the U.S. Fish and Wildlife Service’s Southeast Region historic preservation officer who regularly consults with Native American tribes on land management matters. “The loss of family, land and culture for each of the affected tribes is incalculable. The pain and grief still echoes throughout Indian Country. Remembering and accurately portraying the history surrounding the Trail of Tears and the cost to the tribes is a start toward healing."

In June 1838, along the Tennessee River in northern Alabama, two groups of migrating Cherokees totaling about 1,500 people camped along the river within what is now Wheeler National Wildlife Refuge. A kiosk at the refuge's Flint Creek Day Use Area commemorates the forced migration. Visitors today can follow a 1.5-mile walking trail through an oak-hickory forest.

Today in June, you might fish for bluegill or bass at the refuge. In winter, the refuge supports Alabama’s largest concentration of waterfowl (ducks and geese).

In the 1830s, members of the Chickasaw, Muskogee and Cherokee tribes were transported via steamboat on the Tennessee River from Alabama northwest through what is now Tennessee National Wildlife Refuge. There is no record of any of these steamboats stopping along the river in Tennessee for overnight camping. No known campsites or gravesites on the refuge are associated with the Trail of Tears. However, all records have not yet been fully researched.

Today, you might see cedar waxwings flitting about in spring, eastern box turtles sunning themselves in summer, largemouth bass jumping in fall and bald eagles soaring in winter.

In the 1830s, a branch of the Trail of Tears crossed southern Illinois about five miles north of what is now Cypress Creek National Wildlife Refuge.

Today, you might see bald cypress trees that are hundreds of years old at the refuge. It is cradled between the Ohio and Mississippi Rivers and is part of a RAMSAR Wetland of International Importance.

In the 1830s, forced migrants on one leg of the Trail of Tears passed what are now Chickasaw and Lower Hatchie National Wildlife Refuge along east bank of the Mississippi River in western Tennessee. Specific tracts of land thought to be associated with the trail have been identified. But because of historical meandering of the river and the seasonal flooding today, the landscape has changed, and there is little documentation. Still, today’s refuge habitat and vistas would be familiar to 19th-century tribespeople who traversed the trail. Chickasaw National Wildlife Refuge is named after one of the tribes forced to move.

In the 1830s, Choctaw, Creek, Chickasaw and Cherokee tribespeople moved along a section of the Military Road through what is now Dale Bumpers White River National Wildlife Refuge in eastern Arkansas. The Military Road was built to connect Memphis and Little Rock. The road crossed the White River near the present-day community of Clarendon. During the removal period, one ferry transported travelers on the road across the White River and another carried travelers across nearby Rock Roe Bayou.

Today, the river flows 93 miles through the refuge, which includes fertile bottomland hardwood forests and about 300 lakes interlaced with streams, sloughs and bayous. One result is fabulous fishing, hiking and paddling for some 290,000 visitors annually.

In the 1830s, the Arkansas River flowed through what is now an oxbow off the river’s main channel on Holla Bend National Wildlife Refuge. The refuge’s wildlife observation tower overlooks the oxbow, through which the Trail of Tears passed.

Today, from the observation tower, you can see most of the refuge, which is home to bald eagles and host ups to 100,000 ducks and geese at once in winter. A sign on the tower commemorates the Trail of Tears.

In the 1830s, according to a panel exhibit at Sequoyah National Wildlife Refuge, “More than 15,000 Cherokee began their trek west from their eastern homeland to Indian Territory (present-day Oklahoma) over the Trail of Tears. They traveled by roads and rivers, including this stretch of the Arkansas River. Nearly 1,000 died during the journey westward, and up to 4,000 died as a result of the forced removal process.” Another part of the exhibit says: “Despite the hardships of their journeys, members of the five removed tribes established new lives in the West. They stand as successful sovereign nations, proudly preserving cultural traditions while adapting to the challenges of the 21st century.” The refuge is named after Sequoyah (circa 1770-1843), a Cherokee who devised a system of writing for his tribe.

Today, you can fish for catfish, bass, crappie and other native species at the refuge, which is in the foothills of the Ozark Mountains at the confluence of the Arkansas and Canadian Rivers. You also might see pygmy rattlesnake and cottonmouth, red-eared slider turtles and alligator snapping turtles. Also today, the refuge is working with the Cherokee Nation to restore river cane, a plant that is culturally important to the tribe and ecologically important to bottomland hardwood forest.

In the mid-1800s, what is now Egmont Key National Wildlife Refuge was the site of the forced removal of Seminole tribespeople. Their route followed the Gulf of Mexico coast up to Florida’s panhandle, headed toward New Orleans, progressed up the Mississippi River, connected with the main trail at the Arkansas River and continued to Fort Gibson in Oklahoma. The last trip was in 1858, when Seminole Chief Billy Bowlegs and about 160 individuals left Egmont Key aboard the Grey Cloud, a steamboat.

Today, the refuge, at the mouth of Tampa Bay on Florida’s west coast, provides nesting habitat for threatened Atlantic loggerhead sea turtles and for a large population of gopher tortoises and box turtles.

In the early 1840s, what is now Cedar Keys National Wildlife Refuge was the site of Cantonment Morgan. The military post briefly imprisoned captured Seminoles before they were forcibly shipped west along the Gulf of Mexico coast to Jefferson Barracks, Missouri. The post, located on Seahorse Key, served as a staging area for U.S. troops deployed during the Second Seminole War. Its hospital treated both the federal troops and Seminoles. Cantonment Morgan was abandoned in 1843.

In the mid-1800s, on May 5, 1858, the Grey Cloud, a steamer with 160 Seminole prisoners aboard, stopped in the town of St. Marks to take on wood for fuel. Polly Parker and a dozen Seminole prisoners were given permission to go ashore to gather roots and herbs for medicine. Parker gave a signal, and the prisoners scattered into the woods & forest that today is part of St. Marks National Wildlife Refuge. Parker returned to her home near Lake Okeechobee and died in 1921. 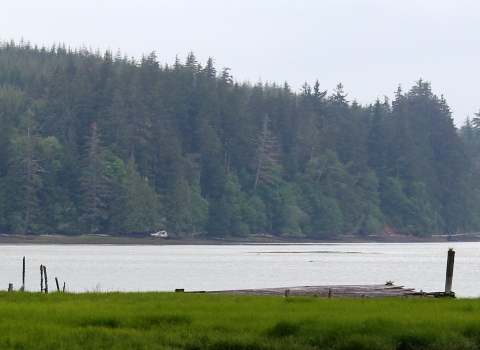