They’re not dragons, and they’re not flies. But the stunt pilots of the insect world are attention-getters. They wear flashy colors, race at up to 30 miles per hour, boast ancestors that predate dinosaurs, mate in midair. Aggressive predators, they’re out for blood – but not yours. What’s not to love?

On national wildlife refuges, many visitors agree. “People are fascinated with finding dragonflies and damselflies [their biological cousins],” says David True, former refuge ranger at Aransas National Wildlife Refuge in Texas. “It is a growing thing.”

At Desert National Wildlife Refuge Complex in southern Nevada, where biologist Jeanne Tinsman volunteers, 43 species of dragonflies and damselflies have been documented. Tinsman can identify them all. She says folklore often whets people’s curiosity about dragonflies.

“For example,” she says, “when I was growing up, there was a story that dragonflies would sew your lips shut. They are also symbols of rebirth. I think people often key in on dragonflies because of these myths. Then people find the insects, and, of course, they’re bright and beautiful and colorful. Some perch a long time,” making them good photo subjects.

If, during your wanderings at Desert National Wildlife Refuge, you spy a woman with binoculars and a dragonfly hat, be sure say hi to Tinsman. And ask about dragonflies. “I love to share about them,” she says.

Dragonflies are not just native wildlife. They are also natural mosquito controls and indicators of clean water. Dragonflies are generally most abundant in mid- to late summer. Dragonflies and damselflies are members of the biological order Odonata, meaning “toothed ones.” (Don’t think about them as having teeth like ours; insects don’t have bones. But, explains True, “they do have mandibles that function similarly for grabbing and cutting food.”)

National wildlife refuges known for their dragonflies include:

Bitter Lake National Wildlife Refuge, New Mexico. More than 60 dragonfly species have been spotted on the refuge, including the rare Bleached Skimmer. Stop by the visitor center to see the collection of dragonflies there. Peak dragonfly viewing is in July and August.

Patoka River National Wildlife Refuge, Indiana. Refuge wetlands host 30 species of dragonflies and 13 species of damselflies, including some rare kinds. A printout available at the refuge office lists them. The Halloween Pennant dragonfly, named for its orange and black wings, can be found at almost any refuge oxbow or wetland from mid-June through early October. 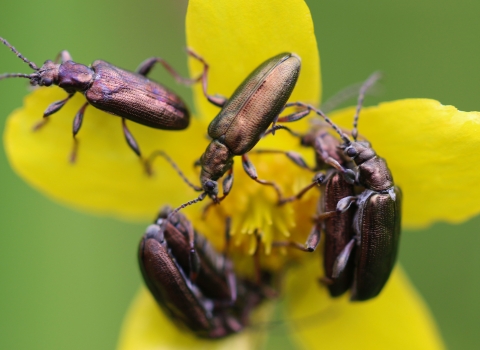 Get Involved
Backyard Insects and Pollinators