A few decades ago, this small but vibrant flowering plant was a rare sight within Washington and Oregon’s dwindling prairie habitats. Thanks to the collective efforts of many partners, the U.S. Fish and Wildlife Service is now proposing to delist the golden paintbrush (castilleja levisecta) due to recovery. This step is a win for conservation and is one of many success stories linked to prairie restoration in the Pacific Northwest.

Pacific Northwest prairies were created at the end of the last ice age when glaciers receded and left large swaths of cleared land in their wake. These fertile landscapes, supplemented by glacial till, became a hot bed of ecological activity as dozens of species of insects, plants, mammals, and reptiles migrated to open grasslands. Prairies were also an important habitat for Native Americans who lived in the region and used these areas for hunting and agriculture. In fact, intentional burning helped maintain the prairies and preserved the ecosystem for thousands of years. Without fire, the Pacific Northwest’s grasslands would have slowly reverted to forests and been lost forever.

Today, Washington and Oregon’s prairies are in decline due to development and fire suppression. In Oregon’s Willamette Valley, only about one percent of the original prairie lands remain. The same is true for Washington’s fire-maintained prairies, where only ten percent of the original grassland communities exist today. Habitat loss and competition from invasive plants and animals has put many species at risk, including Taylor’s checkerspot butterfly, streaked horned lark, and Kincaid’s lupine. Golden paintbrush fell victim to these threats and was listed as threatened under the Endangered Species Act in 1997.

At the time of its listing, there were no populations of golden paintbrush in the Willamette Valley, and the isolated populations in Washington’s Puget Trough were quickly vanishing. Ted Thomas, a former biologist for the Service, was part of a group dedicated to recovering the plant. Recovering any species is a complex process because so many factors contribute to their success. A plant or animal needs a healthy environment in which to survive, so recovering a species involves recovering its habitat as well.

Ted and his fellow biologists had a bit of detective work to do to figure out the best strategy for getting this little yellow flower to grow and flourish. First, they collected seeds from existing plant populations and cultivated them in a greenhouse. These plants were directly transferred to prairie plots in the region where the team hoped they would grow. But unfortunately, due to habitat degradation, none of the plants survived. Invasive grasses outcompeted the golden paintbrush, and poor soil conditions made it impossible for the young plants to take root and thrive. After a few other experiments failed, the team realized that if they were going to save the golden paintbrush, they needed to focus on finding ways to rehabilitate and manage prairies so the ecosystem itself was healthy enough to support it.

In 2009, the U.S. Fish & Wildlife Service enlisted the help of University of Washington botanists Jon Bakker and Peter Dunwiddie, and PhD candidate Eric Delvin to figure out how to rehabilitate and manage prairie habitats. Between fire suppression and woody encroachment, prairies are a conservation-dependent landscape that will not survive without active habitat management. The botanists conducted experiments that involved manipulating the landscape to promote native species growth, control invasive plants, and support golden paintbrush survival.

The experiments included treating plots of land with different management techniques, then planting golden paintbrush and other native plants to see which treatment produced the most growth. Management techniques included burning, mowing, using herbicides to control invasive species invasive species
An invasive species is any plant or animal that has spread or been introduced into a new area where they are, or could, cause harm to the environment, economy, or human, animal, or plant health. Their unwelcome presence can destroy ecosystems and cost millions of dollars.

Learn more about invasive species , and solarization, which uses plastic sheet mulch to burn out invasive plants. An issue the botanists faced was controlling European pasture grasses and other invasive woody vegetation that had been introduced into the ecosystem. Many of these plants have a competitive advantage during drought or other stress events, and therefore will outcompete native prairie species. With numerous factors to consider, the experiment was a challenge.

After a couple of years, however, their hard work paid off, producing surprising results. While mowing helped to prevent prairie conversion to woodland habitat, it was not helpful in controlling invasive grasses and shrubs. The team found that burning and selective herbicide use were the best ways to cull non-native plants while promoting conditions in which the golden paintbrush could thrive. These strategies were so successful that after only three years, the expanded experimental plots boasted over 250,000 golden paintbrush plants.

In 2011, the first of many papers appeared in scientific journals spreading the word on prairie management strategies. The Service began implementing these practices on its Willamette Valley National Wildlife Refuges and immediately saw positive changes. In the Puget Trough of Washington, burning helped convert thousands of acres of scotch broom (an invasive weed) and encroaching Douglas-fir trees into historical prairie conditions. Managed areas are now filled with native grasses and long stretches of prairies covered with blue camas, native forbs, and golden paintbrush. Other conservation groups, partners, and private landowners began to use prescribed fire and herbicides to restore historical habitat conditions. It was a resounding success. 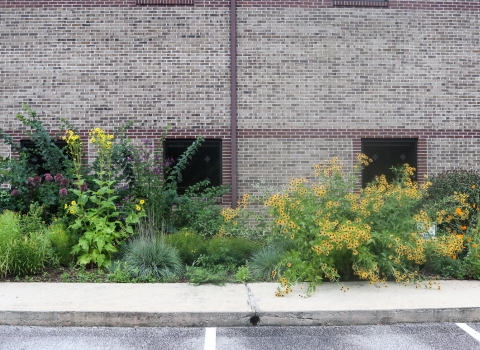