Image Details
Rare Sonoran pronghorn are rebounding
This iconic and unique species is making a comeback.

If sound had color, what fills your ears on a Sonoran summer day would be a matte monochrome. The flat nasally shrill of insects that go sight unseen rises to a crescendo and falls away to a lull, like water swelling and falling in a slow rhythm lapping on a sandy shoal.

It’s sandy here to be sure. But there’s little natural water. It’s locked up in the pulp of cactus or the waxy leaves of sparse green plants. Some of that plant matter is food for the Sonoran pronghorn, an endangered species that’s found nowhere else in the world than in the far southwest corner of Arizona and northern Sonora, Mexico.

The core of what is left of the rare mammal is centered on Cabeza Prieta and Kofa national wildlife refuges. But the animal with a habit to move around in small caravans ranges widely onto other federal public lands: the Barry M. Goldwater Range, Organ Pipe National Monument and Yuma Proving Grounds. The pronghorn exists on the Tohono O’odham Nation as well. Two additional populations persist in Sonora, Mexico.

Searing summer heat reaching 120 degrees Fahrenheit scorches the Sonoran Desert floor. It’s exceedingly arid and the spaces between stands of low shrubs and patches of grasses are wide with more earth and stone and sand showing than vegetative matter. That wildlife can survive here is a testament to the press of time — the flora and fauna are adapted to a life determined by the sky that day in and day out is a cloudless cobalt blue.

Put Together For Speed and Survival

Sonoran pronghorn look like an animal put together by committee: widely spaced ebony eyes protrude on the side of its head just under its horns in front of tall ears. Its legs are as skinny as willow slips that hold up a barrel-shaped torso wrapped in a tan pelt the color of ripe wheat. But form follows function here. Its eyes afford a broad field of vision. The pelt melds the animal into its habitat.

That big chest holds large lungs and a huge heart and those little legs carry a pronghorn over land quicker than any other animal in North America — sixty miles per hour tops. Slower speeds can be sustained for long distances thanks to its impressive cardio-pulmonary system. A pronghorn would rather be out in the open where it can see danger coming for nearly 360 degrees and for a good distance away. And to evade the perils of a would-be predator, a pronghorn doesn’t hide — it just has to outrun it.

Then and Now: Drought Set Their Recovery Back

Despite unparalleled vision and being fleet of foot, Sonoran pronghorn could not evade wide-spread habitat loss as a result of in part from incompatible grazing practices that in some areas contributed to accelerated erosion and the replacement of plants unfavorable to pronghorn. Moreover, pronghorn avoid the artifices and presence of people such as canals and roads and increased activity around some areas of the border. The crush of tires over gravel roads perturbs the animals; paved roads are shied and canals carrying domestic water to cities are simply foreign and avoided, but not because of the water.

Water seems to be a limiting factor in Sonoran pronghorn conservation. That was brought to light with a dreadful drought in 2002. The animal limped through a crippling 13-month dearth of rain and it nearly fell into the abyss of extinction. Through the previous two decades, the population averaged about 140 animals. In 2002, it sank to a mere 19 individuals when the summer monsoonal rains that usually come pouring down in July waited until September to arrive. The drought lowered fawn survival and left the population with fewer healthy adults in the population to breed. The population was top-heavy with older animals.

From dire circumstances come drastic measures: in late 2003, seven of the remaining 19 animals were caught and placed in a 640-acre pen on Cabeza Prieta National Wildlife Refuge to facilitate captive breeding and re-stocking as habitat improved. Captive breeding continues, but is viewed as a temporary measure. Over the last decade, the populations have trended in the right direction; 241 pronghorn have been released from captivity; four years ago, Kofa National Wildlife Refuge received 13 pronghorn delivered in by helicopter. Range-wide the numbers are steadily climbing from the dangerous low point of 2002.

The Border Patrol keeps up its necessary work along the international border and has supported essential conservation endeavors underway, such as captive breeding. The Wildlife and Sport Fish Restoration program, funded by hunters and anglers, has granted funds to the Arizona Game and Fish Department to build 18 water catchment systems on the national wildlife refuges. The structures catch rain, collect it underground and let the water gravity-feed to a lower point where wildlife can drink it. It’s been hugely successful in improving the lot of Sonoran pronghorn. The larger of the catchments can collect enough water during summer monsoons to store and deliver water for pronghorn until they are replenished when rain falls upon the land the following summer.

Population monitoring continues on the ground and in the air. Some animals carry radio transmitters. Every two years aircraft fly over the same lines above Sonoran pronghorn habitats, spotting and counting the number of animals seen and heard by telemetry, to count the population in the wild. Captive breeding continues as well, with 82 pronghorn presently kept at Cabeza Prieta National Wildlife Refuge and another 28 housed at Kofa.

With the drought of 2002 behind us, the future of the endangered Sonoran pronghorn looks relatively sunny. The peculiar animal adds color to the harsh land: what a sight they are to see when they ruffle their white rump and bolt away with ease — far faster than any would-be predator can possibly run. 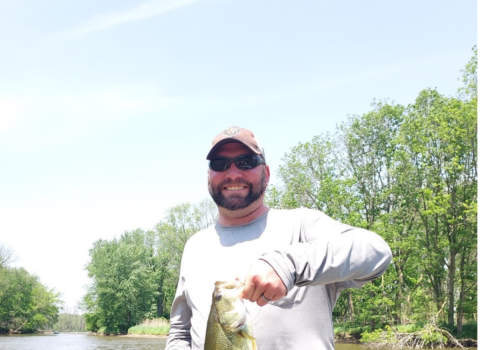