Rachel Carson National Wildlife Refuge was established to preserve migratory bird habitat and waterfowl migration routes associated with southern Maine's coastal estuaries. In the mid -1800s, the estuarine habitats teemed with wildlife. The fishing industry supported many people, and commercial hunters made their living from the wildlife that frequented the marshes. Spurred by the arrival of the railroad in 1842, recreational use of the Maine coast increased in the 19th and 20th centuries. Thousands of visitors came by train, trolley, and later; automobile. Seasonal and vacation homes built on the  edge of the salt marsh salt marsh
Salt marshes are found in tidal areas near the coast, where freshwater mixes with saltwater.

Learn more about salt marsh quickly followed. By the 1950s and early 1960s, land was at a premium for prospective landowners and individuals and groups interested in protecting nature resources. 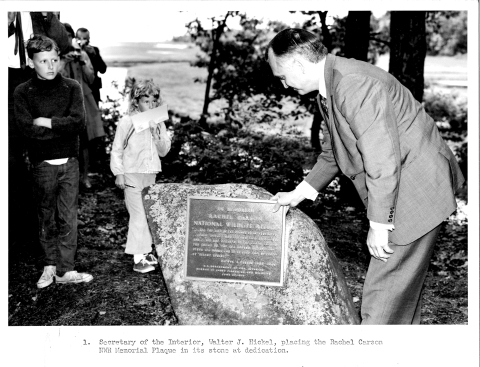 On December 16, 1966, Congress established the Coastal Maine National Wildlife Refuge under the authority of the Migratory Bird Conservation Act. In a formal dedication ceremony on June 27, 1970, the refuge was renamed in honor of the scientist and author Rachel Carson, who spent much of her life along the Maine coast. During the mid-1970s, the refuge acquired 4,000 acres, and has expanded its boundary several times over the years to protect coastal salt marshes from encroaching development, and thereby protecting vital wildlife habitat. The refuge now stretches 50 miles along the coast, and shares more than 5,000 acres with the municipalities of Cape Elizabeth, Scarborough, Old Orchard Beach, Saco, Biddeford, Kennebunkport, Kennebunk, Wells, Ogunquit, York, and Kittery.

Our eponym, Rachel Carson, inspired our vision, which is defined by the mission of the Refuge System. The Service mission is

"Working with others, to conserve, protect, and enhance fish, wildlife, and plants and their habitats for the continuing benefit of the American people."

As champions of Rachel Carson's principles, and in recognition of the connectedness of all living things, we are committed to finding reasonable accommodation for the needs of humans and wildlife.

Rachel Carson refuge was established under the authority of the Migratory Bird Treaty Act for "use as an inviolate sanctuary , or for any other management purpose, for migratory birds" 16 USC Section 715d, Migratory Bird Conservation Act. Other authorities include:

Rachel Carson began a 15-year career with the US Fish and Wildlife Service in 1936 as an aquatic biologist, and rose to become Editor-in-Chief of all publications for the Service. With the success of her second book, The Sea Around Us, she was able to resign from the Service and purchase a cottage on Southport Island, where she researched its beaches and tide pools for The Edge of the Sea.

Rachel Carson wrote about the interconnectedness of all living things; each species has its own ties with others, and all are related to the earth. This is the message of Silent Spring and the earth-sea trilogy. She simply and convincingly explained the connections between humans and all creatures of the Earth. Persevering under industry and government pressure to abandon her research, in Silent Spring she linked the unrestrained use of post-World War II chemical pesticides with their fearsome biological consequences. That book is also credited with launching the modern environmental movement.

In formal recognition of her achievements, Congress renamed and dedicated the former Coastal Maine National Wildlife Refuge in her honor on June 27, 1970. Rachel Carson was a world-renowned marine biologist, author and environmentalist who served as an aquatic biologist and editor-in-chief for the US Fish and Wildlife Service. She has been credited with launching the contemporary environmental movement and awakening the concern of Americans for the environment.