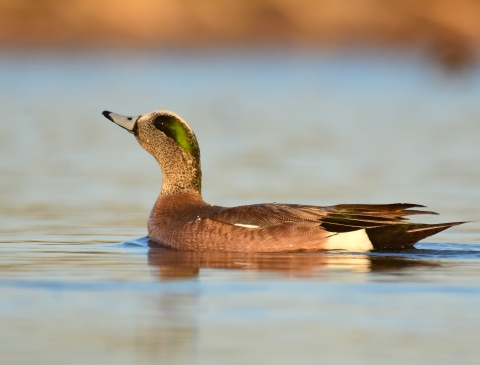 Lake Andes Wetland Management District is in the southern portion of the Prairie Pothole Region. The 104,242-acre Wetland Management District was established in 1958 and protects 18,782 acres of habitat in waterfowl productions areas. The waterfowl production areas are public lands open to hunting, fishing, wildlife observation and other forms of wildlife-dependent recreation. In addition, the district protects an additional 80,000 acres of habitat through easements that prevent loss of wetlands and grasslands on private land.

Imagine a farm family of the 1870's living in the woodlands of the East. These were tough, independent people, the third generation of a family that had grubbed out a living in deeply forested areas. Word had come to them that good, fertile land was virtually free for the taking in the West - open land with no trees that had to be cut down and rooted out.

The lands of the northern prairies beckoned this family and thousands of their countrymen. Upon leaving the forested protection of the eastern woodlands, they entered a treeless, open land dominated by the sun and endless grasslands interrupted by thousands of shallow marshlands or wetlands.

This mixture of prairie grasses and shallow waters was well known for its abundant wildlife. Buffalo, antelope, elk, ducks, and geese were there in great numbers. Both American Indians and white settlers depended on the wildlife of these wet prairies for food and other uses. As settlement of the prairie accelerated, settlers looked for ways to increase production of crops. Thus, the drainage of prairie wetlands began.

Drainage of wetlands continued unabated until the adverse impacts were very evident. Wildlife, dependent on wetlands in so many way, declined in numbers. Floods became more severe on lands downstream of heavily drained areas.  In response to the disastrous effects that the drainage of wetlands was having on ducks and other wildlife, the United States Congress appropriated funding for the protection of prairie wetlands.

As wetland losses continue to occur, Waterfowl Production Areas will offer future generations a glimpse of a land that only a short time ago was dominated by prairie grasses and wetlands. The sight of waist-high grasses waving in the wind, of wildflowers ablaze with color, and of a distant wedge of ducks skimming above the surface of a wetland is a scene not soon forgotten.