Image Details
James River NWR was established in 1991 to protect bald eagles and other species of special concern within 4800 acres of forests and wetlands. Management of these lands focus on conserving habitats to benefit and promote healthy populations of native plants and animals. The wildlife refuge provides a safe haven and nursery ground for hundreds of living creatures. 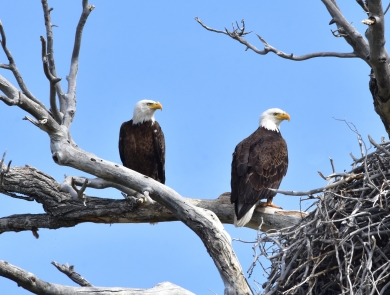 Wildlife Wonders
Eagles Across America
Half a century ago, the bald eagle was in danger of extinction. Conservationists helped lead a remarkable recovery, and in 2007 the bald eagle was removed from the federal list of threatened and endangered species. This article touches on why the bald eagle inspires the awe and respect that it does.
Jan 13, 2023 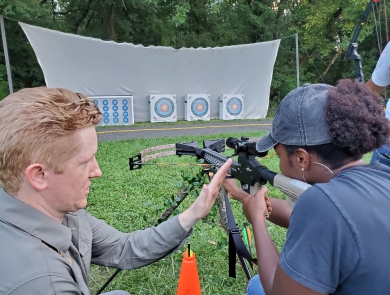 National wildlife refuges offer us all a chance to unplug from the stresses of daily life and reconnect with our natural surroundings. Visitors at James River National Wildlife Refuge may access the newly expanded 1.5 mile Powell Creek nature trail and kiosk information area year-round, from sunrise-sunset, seven days a week. Come view our wildlife and take photos! Please be reminded that pets are prohibited on the refuge. All other visitor access is to occur only during refuge sponsored events and by pre-arranged permit.

James River National Wildlife Refuge is located in Prince George County, Virginia, along the south bank of the Lower James River. The refuge is approximately 6 miles east of Hopewell, Chesterfield County, Virginia, and approximately 30 miles southeast of Richmond, the State capital. The refuge encompasses 4,800 acres of pine-dominated, moist hardwood, and floodplain forests; freshwater marsh and shrub swamp; aquatic habitats; erosional bluffs; and non-forested upland. The regional context of the project area is defined by the interactions of the nearby metropolitan area, the James River watershed, and the Chesapeake Bay Estuary.

The refuge manages its forests and wetlands through a variety of different methods. Mechanical removal, mowing, prescribed burns, and herbicide applications are used to restore and maintain the integrity of these habitats. Tree planting is utilized to promote restoration of forest lands.

The James River National Wildlife Refuge was initially established along the south bank of the Lower James River specifically for the protection of bald eagles. Today it is a home to a variety of species conserving diversity and biological integrity throughout its protected habitats. Chuckwill’s-widow, brown-headed nuthatch, eastern wood-pewee, prairie warbler, and red-headed woodpecker are some of the migratory birds considered high concern on the refuge. These Cavity-nesting species prefer older pine stands that contain snags for roosting and high insect populations for foraging. Open understories created from prescribed burning increases foraging and breeding opportunities for Chuck-will’s-widow. The eastern wood-pewee uses the high canopy of this habitat for nesting. Many mammal species are also known to be present within the refuge such white-tailed, eastern cottontail rabbit, opossum, American beaver, and various bats. The riparian riparian
Definition of riparian habitat or riparian areas.

Learn more about riparian forests and wetlands along the refuge as well as the isolated vernal pools, swamps, and marshes on the interior of the refuge provide breeding and foraging habitat for many species of reptiles and amphibians. They include spotted salamander, spotted turtle, and eastern box turtles, eastern spadefoot, and hog nosed snake.

James River National Wildlife Refuge supports research and projects to help promote biological understanding as well as recognizing the rich culture heritage of the land. The wildlife refuge works with State agencies and universities to gain new insight into species management and the previous occupants/uses of the area.