Waterfowl populations usually peak in early January. Canada geese, mallards, black ducks, gadwalls, American wigeon and many other species are concentrated on embayments, impounded waters and other protected areas. This is the month Bald Eagles are most numerous. 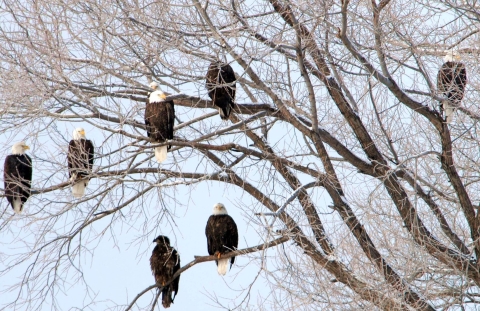 Herring and ring-billed gulls begin to gather and stage. Late in the month large numbers of ducks and geese begin to leave the refuge for the return flight northward.

Crappie season starts in Lake Barkley. Great blue herons start nesting. By mid-month many of the waterfowl have left the refuge.Wood ducks begin nesting and will bring off broods in late April. Seasonally closed for the winter, on March 16th the refuge will re-open to the public.

Blue winged teal can be seen on the refuge as late departing migrants. Wild turkeys become active as the courtship season arrives. Catfish and bass fishing peak in late April. Crappie fishing peaks in mid April. Osprey can be seen migrating northward along the Cumberland River. Squirrels become more noticeable in the woodlands as spring time blossoms on the refuge. Spring Turkey hunting begins on the refuge and follows the state-wide seasons.

Early in the month is peak migration time for warblers, songbirds and other birds migrating through the area.

Beaver are very active along sloughs and creeks. Owls can be heard late in the evening. 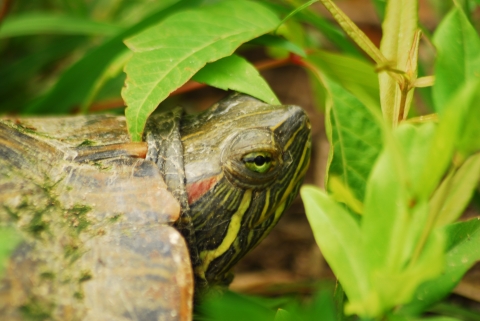 Numerous turtles can be seen in the sun on stumps and banks in the Duck River Bottoms. Squirrel hunting begins on the refuge following state-wide seasons.

Mourning doves numbers reach a peak this month. The blue-winged teal migration comes in early or mid-month. Canada geese and a few species of ducks begin arriving in late September. Osprey migrate southward for the winter. Monarch butterflies can be seen migrating southward. Resident Canada goose hunt is held the beginning of the month.

This is the best month for fall bass fishing. The white-tailed deer are most visible at this time. Deer hunts begin on the refuge.

Mallards, gadwall, wigeon, green-winged teal and pintails arrive in large numbers. Red-tailed hawks numbers are at the peak of their fall migration. Bald eagles and a few golden eagles will move into the area for the winter.  Flocks of white pelicans are more frequent on the refuge through December. All hunting seasons end on the refuge mid November. The entire refuge is closed to all public access to provide waterfowl with sanctuary on November 15th 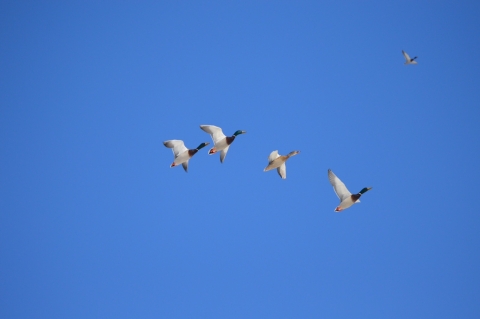 Waterfowl numbers increase during this period. Bird watching for ducks and geese is excellent. Both coots and grebes can be seen throughout the refuge.