EDSM has three objectives: (1) estimate the total abundance of Delta smelt on a weekly basis, (2) estimate their spatial distribution at a management-relevant spatial and temporal resolution, and (3) provide data that support management decisions and address scientific questions to further understanding of sampling efficiency, drivers of Delta smelt population patterns, and other conservation and management-relevant topics.

Daily and weekly summary reports are available in the Lodi FWO Monitoring Data collection. Complete data files that have undergone final quality checks are available on the Environmental Data Initiative Data Portal. You can also email john_cook@fws.gov for more information. 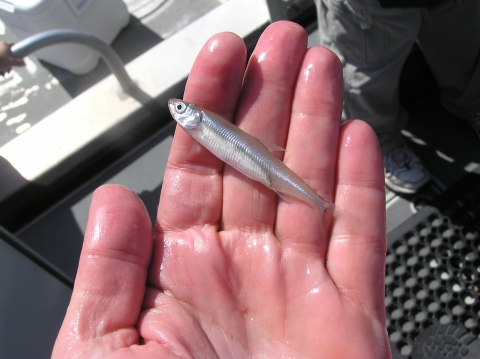 Lodi and Bay-Delta FWO scientists have used the data to produce peer-reviewed journal articles, some of which can be viewed at the links below, and are developing Delta Smelt statistical models, which assess and predict the effects of water-management actions on the fish’s population.

Lodi's EDSM team is also working with the Bay-Delta FWO and other partners on a plan to begin stocking hatchery-raised Delta smelt in 2024 to bolster the wild population. The Bay-Delta FWO genetics-management and species-supplementation experts and LFWO field staff are collaborating with other federal and state agencies, the University of California, Davis, and other stakeholders on research to guide supplementation. This includes developing a spawning strategy that will achieve genetic-management objectives and developing genomics-based markers that will enable the team to monitor smelt in the wild and estimate the genetic effects of supplementation. Experimental Delta smelt release efforts began in December 2021.

San Francisco Bay-Delta Fish and Wildlife Office
A leader in California natural resource planning, research and restoration, we work with members of the public and other partners to conserve fish, wildlife, plants and their habitats for future generations.
Conservation Office
Sacramento, CA