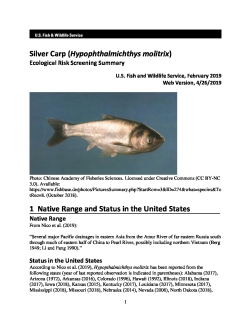 Hypophthalmichthys molitrix, the Silver Carp, is a carp species native to eastern Asia. This species has a high history of invasiveness: since being introduced to the United States via aquaculture in the 1970s, it has escaped captivity and spread rapidly in the Mississippi and Missouri River basins with documented negative impacts. Negative impacts to the United States attributed to H. molitrix and its congener H. nobilis include alterations to the zooplankton community and lowered body condition of native planktivores. Such impacts have also been documented in other locations where H. molitrix has been introduced and has become established. Threats to humans are significant, including transfer of zoonotic pathogens and bodily injury and property damage from jumping fish. H. molotrix has a high climate match with the contiguous United States, with all 48 states scoring as high match. Certainty of this assessment is medium because information available on negative impacts of this species does not often distinguish between the effects of H. molitrix and H. nobilis. Despite this, the overall risk assessment category is still High.