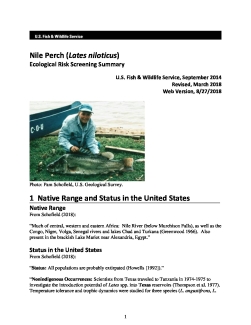 Lates niloticus is a species of perch native to much of tropical Africa. It has been introduced to Lake Victoria (Kenya, Tanzania, and Uganda), Lake Kyoga (Uganda), Lake Nabugabo (Uganda), and some of their satellite lakes. All three large lakes have reported major declines of native haplochromine cichlids at the same time as L. niloticus densities increased. Partial recovery of haplochromine cichlid populations in Lake Victoria more recently as fishing reduced the L. niloticus population implicates L. niloticus as a strong influence on the native species decline. Introductions were attempted in Texas reservoirs in the latter part of the twentieth century, but all populations either failed or were extirpated. In 2016, the U.S. Fish and Wildlife Service designated the Nile perch as an injurious species under the injurious wildlife provisions of the Lacey Act (18 U.S.C. 42). Climate match to the contiguous U.S. was medium, with areas of highest match occurring in California, Arizona, and Florida. Overall risk posed by this species is high.