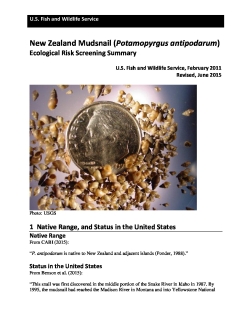 P. antipodarum, native to New Zealand, has been introduced to Europe, Asia, North America, and Australia. Its small size, ability to withstand dessication and temperature variation, and parthenogenic reproduction facilitate its accidental introduction and establishment in new locations. The species can be found living in extremely high densities (tens of thousands per square meter) in some locations. Negative impacts have been documented on native macroinvertebrates, mollusks, and fish. Its impacts have been likened to those of the zebra mussel (Dreissena polymorpha). Climate match with the contiguous US is high. Overall risk for this species is high.