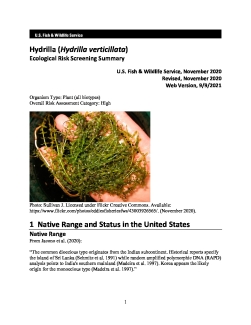 Hydrilla (Hydrilla verticillata) is a freshwater plant native to Asia, Australia and parts of Africa. The species has three separate biotypes, two of which have documented reproductive strategies, and a third biotype discovered in 2020 with little information known regarding reproduction. Hydrilla is a common aquarium plant. The history of invasiveness is classified as High. There is a long history of accidental introductions through contaminated aquarium plant shipments, and natural dispersion when plant fragments break off and re-establish. Boaters and anglers often incidentally transfer the plant from contaminated waterways into unestablished ones. It has been listed as a noxious weed in the United States since 1976 and is regulated at the state level by multiple States. Almost all introductions have resulted in established populations, and the plant is established on every continent except Antarctica. There are documented negative impacts of introductions, including outcompeting native plants, altering zooplankton communities and thereby affecting fish prey availability, and decreasing dissolved oxygen content of waterways when thick vegetative mats that block sunlight decompose. The overall climate match was High throughout the contiguous United States. The certainty of assessment is High. The overall risk assessment category is High.