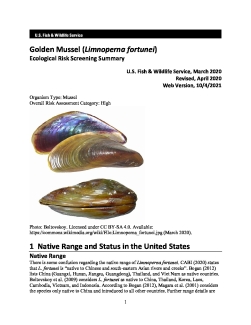 Limnoperna fortunei, the golden mussel, is a mussel native to China and possibly some of Southeast Asia as there is some confusion around the species native range. It has been introduced to a number of other countries where it has become established. Negative impacts, such as macrofouling, water clarity alteration, displacement and diet alteration of other species have been reported from these areas. Regulations for this species exist in Japan, Ontario (Canada), Ohio, Michigan, Illinois, and Wisconsin. L. fortunei has not been introduced to the United States but a number of sources report it as likely, comparing it to Dreissena polymorpha, due to its environmental tolerance and invasiveness. The history of invasiveness for L. fortunei is classified as High. The overall climate match was high, with the central, east, and southeast areas of the contiguous United States having high matches. The overall risk assessment category for Limnoperna fortunei is high.

Aquatic Invasive Species
Aquatic invasive species cause tremendous harm to our environment, our economy, and our health. They can drive out and eat native plants and wildlife, spread diseases, and damage infrastructure. We work to protect our waterways and the communities that depend on them from the threat of invasive...
Program
Subject tags
Invasive species