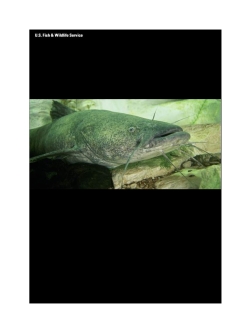 Flathead Catfish (Pylodictis olivaris) is a freshwater fish native to the lower Great Lakes, Mississippi River basin, and parts of the Gulf Slope in the United States and Mexico. Much information is available on P. olivaris, leading to a high certainty of assessment. P. olivaris is a prized sportfish and has been introduced throughout much of the United States. It is also displayed in public aquaria. Impacts of these introductions are well documented and include competition and predation on native fish and invertebrate species, leading to declines in those populations. Several of the native species affected by P. olivaris introduction are federally listed under the Endangered Species Act. History of invasiveness is high. Climate match with the contiguous United States is high overall, with only small regions of low or medium match. Overall risk posed by P. olivaris to the contiguous United States is high.