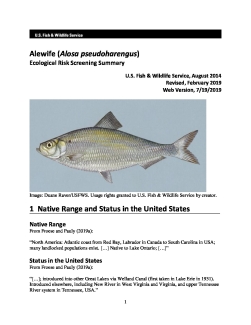 Alewife (Alosa pseudoharengus) is an anadromous marine and freshwater fish native to the Atlantic coast of North America and associated streams and rivers. The species generally consumes plankton and is a prey species in both the native and introduced ranges. There is some human consumption of the species and it is used as bait and for fish meal. Commercial harvesting is not economically sustainable. The history of invasiveness is high. This species spread to the Great Lakes and various states through man-made channels, such as the Erie and Welland canals, and stocking, and is now established. A. pseudoharengus is an efficient zooplanktivore, and causes changes in the zooplankton community. Those changes and direct competition caused declines in native fishes, especially planktivorous coregonids; although there is some disagreement in the literature about this. Salmonids that consume A. pseudoharengus are at risk of a thiamine deficiency, resulting in Early Mortality Syndrome, in their offspring which has severely impacted populations. A. pseudoharengus is prone to mass die-offs, which are a nuisance for lakeshore property owners and have a negative economic impact on the recreation industry. There may be some beneficial impacts through a reduction in biomagnification of contaminants in Walleye as A. pseudoharengus are on a lower trophic level than the Walleye’s native prey. State level regulations affecting A. pseudoharengus are in place in Minnesota, New York, and Ohio. The overall climate match for the contiguous United States is high. Almost the entire eastern two-thirds of the contiguous United States (including the native range of the species) had a high climate match. Low climate matches were found along the Pacific Coast and the Mexican border. The climate match is valid for freshwater and brackish water areas only. The certainty of assessment is high. The biology of the species, distribution, and history of invasiveness is well documented. Overall risk for this species is high.