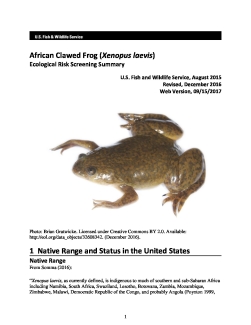 Xenopus laevis is a large frog species native to sub-Saharan Africa that has become established in the Americas, Europe, and Asia. The species has been used globally as a laboratory research specimen and is also found in the pet trade. As an introduced species, it has been shown to suppress reproduction in native amphibians in Italy, to consume an endangered fish species in the U.S., and transmit disease to native amphibians in Chile. X. laevis is also a pest in carp aquaculture. The species shows a high climate match to the contiguous U.S. Overall risk posed by X. laevis is high.