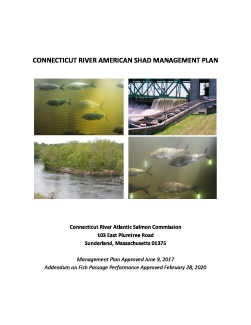 INTRODUCTION
The Connecticut River population of American Shad has been cooperatively managed by the basin state and federal fishery agencies since 1967. In that year the “Policy Committee for Fishery Management of the Connecticut River Basin” was formed in response to the passage of the 1965 Anadromous Fish Conservation Act (Public Law 89-304) by the U.S. Congress. This committee was replaced by the more formal “Connecticut River Atlantic Salmon Commission” (CRASC), which was created by act of Congress (P.L. 98-138) in 1983 (Gephard and McMenemy 2004) and coordinates restoration and management activities with American Shad (http://www.fws.gov/r5crc/). The CRASC American Shad Management Plan had a stated objective of 1.5 to 2.0 million fish entering the river mouth annually (CRASC 1992). Diverse legislative authorities for the basin state and federal fish and wildlife agencies, including formal agreements to restore and manage American Shad, have been approved over time and are listed in Appendix A. The following Plan updates the existing CRASC Management Plan for American Shad in the Connecticut River Basin (1992), in order to reflect current restoration and management priorities and new information. An overview of American Shad life history and biology is provided in Appendix B.