Classification of Wetlands and Deepwater Habitats of the United States 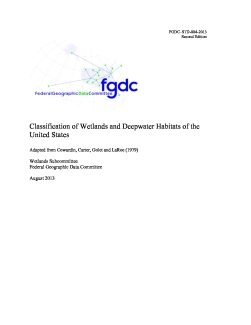 The Classification of Wetlands and Deepwater Habitats of the United States (Cowardin et al. 1979) was developed to support a detailed inventory and periodic monitoring of the Nation’s wet habitats using remote sensing. Often referred to as “The Cowardin System,” it is a hierarchical system that captures the aquatic system, type of substrate, and water regime of wetlands. It became a National Standard in 1996 (FGDC-STD-004) but has been the de facto standard for mapping U.S. wetlands and deepwater habitats since 1976.

National Wetlands Inventory
The U.S. Fish and Wildlife Service is the principal federal agency tasked with providing information to the public on the extent and status of the nation’s wetland and deepwater habitats, as well as changes to these habitats over time.
Program
Baileys Crossroads, VA
Ecosystem
Wetland
Subject tags
Wetlands