The focus is on fish at the Leavenworth Fisheries Complex. But managers have found ways to protect pollinators, too, while making their sites more attractive to both wildlife and people.

Manager Chris Pasley at Winthrop National Fish Hatchery started working with Rob Crandall of Methow Natives Nursery back in 1997. They met at a Watershed Watchers event the hatchery organized with the local Liberty Bell Junior-Senior High School. The area between the hatchery and its water source was infested with invasive knapweed. Over about five years, Methow Natives hand-pulled the plants and introduced a beetle that eats knapweed seeds. They planted natives adapted to the area, like snow buckwheat, rabbitbrush, sagebrush sagebrush
The western United States’ sagebrush country encompasses over 175 million acres of public and private lands. The sagebrush landscape provides many benefits to our rural economies and communities, and it serves as crucial habitat for a diversity of wildlife, including the iconic greater sage-grouse…

Learn more about sagebrush , and grasses (Idaho fescue, sand dropseed, and bluebunch wheatgrass). “They never used any chemicals,” affirmed Pasley, a choice important for protecting the juvenile Chinook and Coho salmon and steelhead on site.

Today, knapweed is reduced to spotty, controllable patches. Waist high sagebrush and robust native species thrive. “It’s a good example of the effectiveness of establishing competitive plants that fight invasives,” Crandall said. The result is stable and long-lasting. Snow buckwheat and rabbitbrush are especially important plants for pollinators because they bloom in late summer, Crandall said, when most other native plants are long since done flowering.

At Leavenworth National Fish Hatchery, a 2,400 square foot pollinator garden occupies a central location opposite the main nursery and draws visitors through a decorative gazebo and down a 150 foot-long path. Volunteers got the garden going in 2016. The hatchery has a partnership with the Chelan-Douglas County Master Gardener Program to continue maintenance and interpretation of the garden. The garden earned recognition with an award from the North American Pollinator Protection Campaign. Leavenworth’s Master Gardeners are delighted to be back at the hatchery now that pandemic restrictions have eased. “The team is doing a wonderful job,” said Marjie Lodwick, temporary Visitor Services Manager. “The garden looks so different already.”

Entiat National Fish Hatchery also faced a knapweed desert at one time. Manager Craig Chisam made attacking this problem a priority. Today, a large portion of once-infested land hosts a trout pond and hundreds of young trees. Chisam hopes to increase pollinator-specific plantings on the property, and continues to fight invasive species. The Red Willow Trail along the river edge of the hatchery is fragrant with masses of mock orange in spring, and other native species abound along the river and in the wetland that drains the trout pond.

The Mid-Columbia Fish & Wildlife Conservation Office works on restoration projects throughout the region, and that includes right around their own office. Fish Biologist and Master Gardener Ken Muir planted a pollinator garden in beds beside the buildings in 2016. These plants continue to thrive.

While our hatcheries and conservation office aim to support fish and the rivers in which they live, we know all wildlife is connected. Walk any of the trails at our sites and you can enjoy blooming flowers and sightings of healthy wildlife, from birds to bears to bees. We welcome volunteers who love wildlife of all kinds. Want to help? Get in touch! Leavenworth@fws.gov. 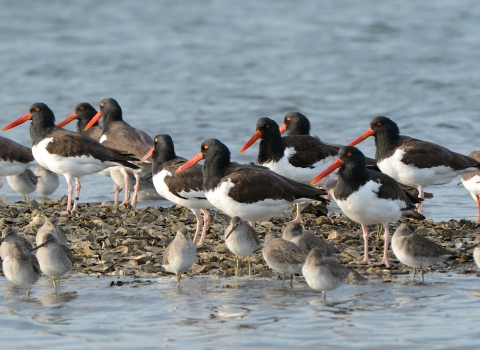