Extensive flooding in the 1970s forced invasive carp into rivers, streams and lakes and the fish have continued to migrate. Large portions of the nation’s river systems are now occupied by one or more species of invasive carp. In recent years, these destructive fish have more rapidly expanded their range and numbers. When large populations of invasive carp become established, they can pose a risk to human safety and native wildlife.

In the Southeast, carp put the region’s aquatic biodiversity at risk. For example, silver and bighead carp out-compete native sport fish like crappie and largemouth bass. And black carp feed on the freshwater mussels that help keep our aquatic systems healthy by providing good water quality for people, waterfowl and other wildlife species. Consequently, these fish harm local economies that rely on fishing, boating, and waterfowl hunting.

A collaborative effort for controlling carp

Controlling invasive carp in our nation’s waters requires the Service and its partners to remain focused, effective, and innovative. Federal and state agencies will leverage scientific expertise, data collection, new technologies and strategic planning across the various river basins.

The Mississippi Interstate Cooperative Resource Association (MICRA) is a good example of collaboration. This partnership of 28 state agencies, and a handful of federal agencies and tribes, is developing a basin-wide perspective on invasive carp management and control. MICRA annually identifies priorities to address carp in the Mississippi River Basin and recommends state-led projects to be funded with Service dollars.

Sound has shown promise as a potential barrier to invasive carp passage and is being tested at lock and dam structures on large rivers where carp abound. The Service is working with the U.S. Army Corps of Engineers, with the support of the Kentucky Department of Fish and Wildlife Resources, the Tennessee Wildlife Resources Agency, and other partners, to deploy a large-scale sound deterrent trial project at Barkley Lock and Dam in western Kentucky.

The goal of the bio-acoustic fish fence, also referred to as BAFF, is to reduce the movement of invasive carp through the locks. This will help protect hundreds of river miles in the Tennessee and Cumberland rivers that remain relatively untouched by carp. The BAFF, developed by U.K.-based Fish Guidance Systems, deploys a curtain of bubbles, light and sound to deter carp from the lock entrance without encumbering commercial and recreational navigation.

Installation of the BAFF at Barkley Lock and Dam began in July 2019. The system became operation in October 2019. A three-year field trial is the next step in determining the system’s effectiveness.

The BAFF project costs an estimated $7 million, which comes from the Great Lakes Restoration Initiative and leveraged financial support from the Service. The findings of the project will inform federal and state efforts to slow the spread of invasive carp and prevent their establishment in the Great Lakes.

Kentucky is on the front lines of the war on carp. The Kentucky Department of Fish and Wildlife Resources, in February 2020, deployed the so-called Modified Unified Method of carp removal on Kentucky Lake with the assistance of the Service and U.S. Geological Survey as well as the U.S. Forest Service, the Tennessee Valley Authority and the states of Tennessee, Alabama and Mississippi. A series of boats, nets, underwater speakers and electro-fishing gear corrals the carp that have been pushed into a cove or narrow body of water. This carp-corralling method has been tested in Missouri and Illinois and proved mostly successful, removing as much as 90 percent of the fish from the targeted waters. Congress appropriated $25 million overall to the Service in fiscal year 2020 for the unified method and other carp-removal efforts around the country.

Despite unusually warm water temperatures and the need to navigate around natural and manmade snags, invasive carp were successfully herded and removed from Kentucky Lake. Over 69,000 pounds of fish, mostly invasive carp, were harvested from two bays. With slight alterations, Kentucky Fish and Wildlife expects to routinely use this method for removal efforts in appropriate areas. 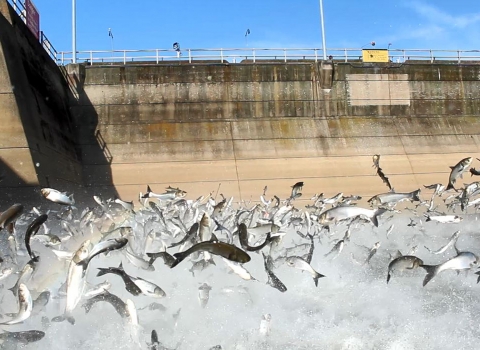