With our 2022 Tribal Wildlife Grants, Alaska Native communities will work with salmon, moose, blue mussels, invasive species invasive species
An invasive species is any plant or animal that has spread or been introduced into a new area where they are, or could, cause harm to the environment, economy, or human, animal, or plant health. Their unwelcome presence can destroy ecosystems and cost millions of dollars.

All told, seven Alaska Native communities will share about $1.3 million of the nearly $6 million awarded.

Since its inception in 2003, including this year’s grants, the competitive Tribal Wildlife Grants Program has awarded more than $111.6 million to Native American and Alaska Native Tribes, providing support for 626 conservation projects. 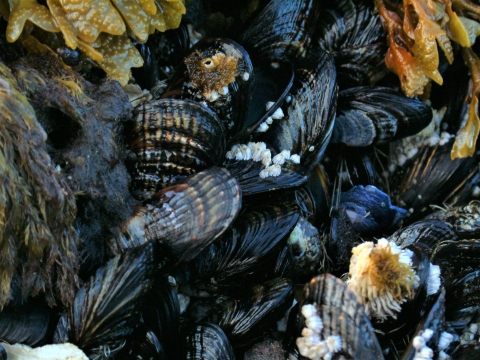 For the Qawalangin Tribe of Unalaska, the $199,000 grant will help develop a restoration plan for blue mussel habitat within Unalaska Bay.

The Tribe has relied on blue mussels as a food source for over 8,000 years. But the changing climate threatens that.

Warming ocean temperatures are linked to harmful algae blooms. Those blooms, in turn, hurt blue mussel habitat and lead to more paralytic shellfish poisoning, which killed a community member in 2020. But the toxins hurt more than people because mussels are an integral part of the food web, feeding birds and aquatic species.

The Tribe is no stranger to blue mussel conservation. A grant from NOAA’s National Centers for Coastal Ocean Science in 2020 supported testing for paralytic shellfish poisoning. The Qawalangin Tribe continued the testing after funding ended, and tests this summer show twice in June and once in July paralytic shellfish toxins were substantially above limits set by the U.S. Food and Drug Administration.

“The island of Unalaska does not have the medical capacity to treat individuals with severe
symptoms” of shellfish poisoning, the Tribe says in one of its application documents. They “must be flown approximately 3.5 hours to Anchorage for supportive treatment.”

The Qawalangin Tribe then has set this as one goal for the restoration plan: reducing paralytic shellfish poisoning in people and wildlife.

We’re proud to fund the Qawalangin Tribe’s work and look forward to its results.