Kodiak National Wildlife Refuge biologists, in cooperation with Oregon State University, are launching a new study focused on some of the archipelago’s most iconic and adorable bird species – puffins!

Sadly, Tufted Puffins have experienced serious declines in the southern portion of their range, declining approximately 90% relative to early 1900s estimates, and are currently declining 9% annually from California to Washington state. They are also declining at the southwestern end of their range in Japan. But how are Tufted Puffins doing in our region – the Gulf of Alaska (GOA)? The species is only regularly monitored at four sites here, but a population viability analysis estimated a 47% decline in population size in the GOA from 1991-2013 and found high probabilities of quasi-extinction over the next 100 years. A species is considered quasi-extinct when the population becomes so small that it will be unable to sustain itself long term.

We know even less about the rarer puffin species on Kodiak, the Horned Puffin. Long-term datasets from certain regions of the GOA hint that the Horned Puffin should also be considered a species of conservation concern. Boat-based surveys from Prince William Sound suggest a high rate of decline from the 1970s to 1990s, but more information is needed.

Katie Stoner, PhD student at Oregon State University, will be initiating a study in summer 2022 to help solve several mysteries about puffins in Kodiak. First, she will analyze two existing survey data sets from the Kodiak Archipelago: one focused on targeted seabird colony surveys and a second more general survey of nearshore marine birds based on systematic at-sea transects. She will compare and contrast the different methods to see if one or the other is more appropriate for analyzing puffin populations. There are several other unanswered questions about our puffins that Katie plans to study. For example: where do they go when they are not breeding on the islands around Kodiak? To answer this question Katie will attach a small device called a geolocator to a leg band on about 25 Tufted and 25 Horned Puffins each breeding season. The geolocators record light levels that are used to derive sunrise and sunset times and determine locations from estimated day length and local time of midday. She will also collect feather and fecal samples to look at the amount of overlap in the species diets.

Much of the funding from for this project comes from the U.S. Fish and Wildlife Service’s Alaska Region Ecological Services Division. In 2021 with the help of interns Emily Case and Lily Messinger the refuge was able to initiate a pilot feasibility study on Puffin Island in Chiniak Bay, where we captured and placed a geolocator on one adult Tufted Puffin and banded ten puffin chicks.

Information from this project will help identify stressors in the marine environment that may impact the conservation status of puffins. The relationship between breeding and non-breeding locations and dietary information can be used to inform overlap between puffins and fisheries, and inform oil spill planning and response. 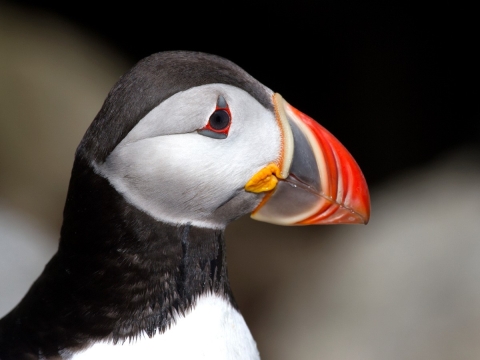