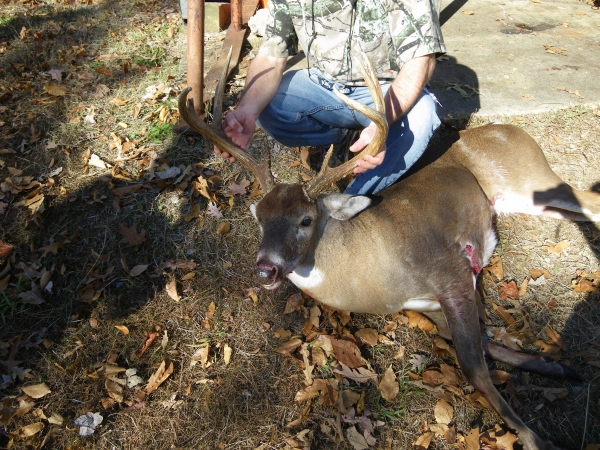 Hunting is authorized during refuge-specific seasons, for select species, by methods and bounds as outlined in the annual James River National Wildlife Refuge Fact Sheet. Approximately 4,000 acres is open to hunting. The refuge is open to regulated hunting except within designated safety zones (including no hunt buffer zones and areas surrounding the public nature trail).

The refuge permits hunting of white-tailed deer, coyote, turkey during designated dates and seasons. General public hunts are arranged by making an advanced reservation with a third-party vendor at RecAccess. These reservations are made on a first-come, first-served basis. Deer hunting is authorized to those that have a valid reservation on a designated Saturday during the archery season, muzzleloader season, and shotgun season. Coyote and Fall turkey may also be taken during the white-tailed deer hunt where State seasons overlap.

A spring turkey quota hunt is offered on select days during the first segment of the spring season in specified areas of the refuge. Registration for the 2022 season has already passed. These highly sought after hunts require individuals to apply through a third-party vendor at RecAccess. Applicants are randomly drawn to participate through a lottery system. If selected, a $25 permit fee is accessed. Once the fee is paid, a permit will be provided for the one-day hunt. The hunt area is divided into zones to allow for the public spring turkey quota hunt. The method of take used for the spring turkey hunt will align with VADWR regulations and be conducted only on Saturdays of the early season to minimize impacts to migrating birds and refuge management activities. See details in the documents below - note that these documents are relevant to the 2022 spring season and are subject to change prior to the 2023 spring turkey hunt.

A summary of dates, rules, and regulations regarding the 2022 spring turkey quota hunt at James River NWR.