Four populations of sandhill cranes are surveyed each year to estimate breeding population size: the Mid-Continent Population (MCP), in the High Plains U.S.; the Rocky Mountain Population (RMP), in the western U.S.; the Lower Colorado River Valley Population (LCRVP), primarily in northeast Nevada, and the Eastern Population (EP) in the Great Lake, Mid-Atlantic and Southeastern states. These populations are monitored through breeding and pre-migration surveys to provide information for harvest management. For the MCP, extensive, spring aerial surveys on major concentration areas that are corrected for observer visibility bias provide annual indices of abundance used to measure population trends. These surveys are conducted in late March, at a time when birds that wintered in Mexico, Arizona, New Mexico, and Texas usually have migrated northward to spring staging areas, but before spring "break-up" conditions allow cranes to move into Canada. A fall pre-migration survey is conducted by 5 states (UT, CO, ID, WY, and MT) for the RMP, to avoid counting cranes from other populations that comingle during the spring breeding period. The LCRVP is surveyed in winter by airplane at four major wintering areas in Arizona and California. The EP is surveyed by volunteers and agency personnel at staging areas in the fall to count cranes migrating from Canada. Survey areas include the Great Lakes (MN, WI, MI, OH, PA and IN), the Mid-Atlantic (KY and TN) and the Southeastern states (GA and FL). 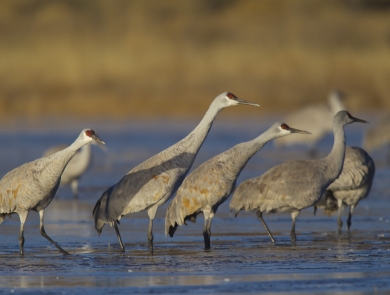 Science and Technology
Using Cutting-Edge Technology to Monitor Sandhill Cranes
The Platte River in Nebraska is renowned worldwide for one thing – sandhill cranes. As part of our federal responsibility to conserve and manage sandhill cranes, our Migratory Bird Program has a robust monitoring program in place. And now, in a collaborative effort with our partners, we are using...
Apr 26, 2022