The ʻiʻiwi is an endemic Hawaiian (found only in the State of Hawaiʻi) forest bird presently found on the islands of Hawai‘i, Maui, and Kaua‘i. 'I'iwi are medium in size and average 5.5 inches in length. Their bodies are adorned with bright scarlet feathers, black wings and tail, and a small white patch on the inner secondary flight feathers. Their bill is long, deeply decurved, and salmon in color. They are also considered important pollinators to native plants like ʻōhiʻa (Metrosideros polymorpha), hāhā (Cyanea spp.), and ʻōhāwai (Clermontia spp.).

Once found in native forests located at sea level, the 'i'iwi is now restricted to high-elevation forested areas due to mosquito-borne diseases such as avian malaria and avian pox, as well as loss of optimal forest habitat. Avian diseases transmitted by mosquitos are the biggest threats to ʻiʻiwi and are the primary drivers of decline in their abundance and distribution throughout the last century. The effects of climate change climate change
Climate change includes both global warming driven by human-induced emissions of greenhouse gases and the resulting large-scale shifts in weather patterns. Though there have been previous periods of climatic change, since the mid-20th century humans have had an unprecedented impact on Earth's climate system and caused change on a global scale.

You may submit comments through one of the following methods:

We request that you submit comments only by the methods described above. If your submission is made via a hardcopy that includes personal identifying information, you may request at the top of your document that we withhold this information from public review. However, we cannot guarantee that we will be able to do so. We will post all submissions on http://www.regulations.gov. Comments and information we receive, as well as supporting documentation we used in preparing this proposed rule, will be available for public inspection on Dec. 27, 2022 at http://www.regulations.gov.

Q: Why are ʻiʻiwi listed as a “threatened” species?

A: ‘I‘iwi have disappeared from lower elevations due to loss of forest habitats and introduced avian diseases (avian malaria and avian pox) which threatens endangerment of the species in the foreseeable future. Avian disease is a particularly serious threat with the recent spread of the southern house mosquito (vector for avian disease in ‘i‘iwi) into high-elevation forest areas. In the last 20 years the population of ‘i‘iwi on Kaua‘i has declined dramatically and now numbers are only approximately 2,000 birds. Some ‘i‘iwi populations on Maui and Hawai‘i Island are also in decline. Today, ʻiʻiwi are no longer found on Lānaʻi and only a few individuals may be found on Oʻahu and Molokaʻi.

A: Historically, ‘i‘iwi inhabited all the main Hawaiian Islands in forested areas from coast to montane tree line. As little as 200 years ago ‘i‘iwi numbered in the millions. Today there are approximately 600,000 ‘i‘iwi restricted to high-elevation forests above 3,900 feet (~1,200 meters) only on the islands of Kaua‘i, Maui and Hawai‘i.

Q: What ecological role do ʻiʻiwi play in Hawaiian forests?

A: ʻIʻiwi are nectarivorous (nectar-eating) birds and important pollinators for many native Hawaiian plants. The curved beak of ʻiʻiwi is a result of centuries of co-evolution with native plants with curved flower corolla (petals) such as hāhā (Cyanea spp.), and ʻōhāwai (Clermontia spp.), but the ʻiʻiwi is also an important pollinator of tree species lacking these specialized flower shapes including ʻōhiʻa and koa. Many closed canopy forests are dominated by native ʻōhiʻa and koa trees and depend on ‘i‘iwi to pollinate them.

Q: What is a “critical habitat” designation and why do we need to create it?

A: Critical habitat is the designation of specific areas within the geographic area, occupied by a species at the time it was listed as threatened or endangered under the Endangered Species Act of 1973 (ESA). These specific areas contain the physical or biological features that are essential to the conservation of the species and may need special management or protection. Critical habitat may also include areas that were not occupied by the species at the time of listing but are essential to its conservation. These areas are proposed based on the best scientific data available pertaining to habitat requirements of the species.

Critical habitat designations do, however, serve as a tool that requires the Service to gather more detailed information about the listed species for effective conservation and recovery. Learn more about critical habitat at this link.

Q: What habitat features do ʻiʻiwi depend on?

A: Native ‘ōhia forest are primary habitat for ʻiʻiwi. The species gets most of its food from the nectar of ‘ōhia flowers and uses tall and moderately tall ‘ōhia trees (tree height greater than 26 feet) to build its nests in. ‘I‘iwi also use other species of native trees and introduced non-native trees to feed and build its nests. Habitats that contain the physical and biological features that are essential for ʻiʻiwi conservation are limited to higher elevations due to loss of coastal and mid-elevation forest habitats and introduced avian diseases (avian malaria and avian pox).

A: Critical habitat helps to identify and establish areas necessary to conserve species, and by protecting large areas of native ‘ōhia forest and other types of forest with flowering trees helps preserve the trees ‘i‘iwi use to forage for nectar and build their nests in. Designation of critical habitat also serves a tool to guide Federal agencies in fulfilling their conservation responsibilities by requiring them to consult with the Service if their actions may “destroy or adversely modify” critical habitat for ʻiʻiwi.

Q: What is the process for designating critical habitat?

A: When designating critical habitat, the Service assesses whether a geographic area contains features that are essential to the conservation of a listed species, and which may require special management considerations or protections.

Using all the best available data and information pertaining to the habitat requirements of ʻiʻiwi, we evaluated and identified specific areas for proposed critical habitat within the geographical area occupied by the species at the time of listing. We determined that occupied areas alone are sufficient for the conservation and recovery of ʻiʻiwi.

The Service will then propose a critical habitat designation, publishing it in the Federal Register and requesting public comments. A virtual public meeting will be held on February 10, 2023 via Zoom. Register here. The proposal may be modified as a result of information provided in the received public comments, and the final critical habitat designation will be based on the best available scientific data and consideration of probable economic or other impacts of the designation.

Q: What kind of comments are we looking for?

A: The Service is requesting comments or information from other governmental agencies, Native Hawaiian organizations, the scientific community, industry, or other interested parties concerning the proposed critical habitat designation for ʻiʻiwi. We particularly seek comments for the islands of Kauaʻi, Maui, and Hawaiʻi in the State of Hawaii concerning, but not limited to:

See Information Requested, in SUPPLEMENTARY INFORMATION in the proposed rule, for more information.

Q: What will happen after I have provided public comment?

A: Oral comments provided during the public hearing portion of the February 10, 2023 virtual public meeting, and written comments received or postmarked on or before February 27, 2023 11:59 p.m. Eastern Time, will receive a response and be reviewed by the Service for information to consider when finalizing the final critical habitat designation rule, including boundaries, which is published in the Federal Register. See Public Hearing, in SUPPLEMENTARY INFORMATION in the proposed rule, or more information.

Q: Will other Hawaiian forest bird species benefit from designation of critical habitat for ‘i‘iwi?

A: Designation of critical habitat for ‘i‘iwi will benefit other Hawaiian forest birds that live in the same forests as ‘i‘iwi, and which rely on these forests, like ‘i‘iwi for food and to build their nests. 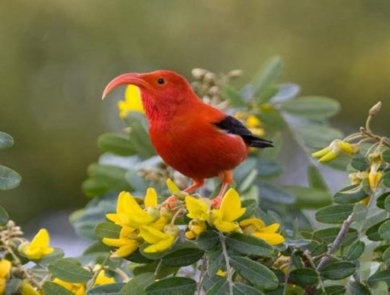