Virtually the entire Pacific Flyway population of black brant use Izembek National Wildlife Refuge as a stopover during the fall migration, allowing for an opportunity to collect data on the current year’s productivity and population size. We've been conducting productivity surveys of black brant at Izembek since 1963 when the first refuge manager initiated this effort. This is currently the only survey that measures an index of Pacific black brant annual production.

Black brant begin to arrive in Izembek in late August and early September from widely dispersed molting and nesting areas in Alaska, northwestern Canada, and northeastern Russia. Most remain for an average of eight weeks before migrating to more southerly wintering areas along the Pacific coasts from British Columbia to northwestern Mexico. Black brant migrate to Izembek to feed on the extensive eelgrass within Izembek Lagoon. Here, they build nutrient reserves for migration and winter. Prior to their fall departure from Izembek Lagoon, adult brant must recover from the energetic demands of breeding and molting. The fat reserves they accumulate thanks to the massive eelgrass bed are critical for fall migration and underscore the importance of the Izembek Lagoon to this species.

We know that most of the first-year mortality of black brant occurs between hatching on the nesting grounds and staging at Izembek, which makes the fall staging population representative of annual productivity. Juveniles can be visually identified with plumage characteristics, so survey participants determine the proportion of flocks that are made up of juvenile and adult birds. Data are shared with partners at the U.S. Geological Survey and our Alaska Migratory Birds Office to create modeled estimates of annual productivity. Managers can use these data in combination with population size and harvest estimates to examine the balance between numbers of juveniles and subsequent mortality, and how it may affect the size of the overall population.

Alaska Migratory Birds Office
Alaska is home to more than 470 species of birds. Most are migratory birds for which the Fish and Wildlife Service is responsible under international treaties and the Migratory Bird Treaty Act. While some of the birds stay in Alaska year-round, most migrate to Canada, Central America, South America...
Conservation Office
Anchorage, AK 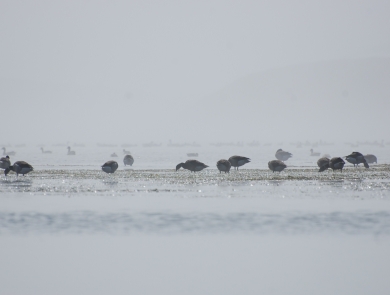