What began as the restoration of an abandoned area near Baltimore Harbor has grown into a nationally recognized partnership connecting the city’s residents to the outdoors. The U.S. Fish and Wildlife Service designated Masonville Cove, as the nation’s first Urban Wildlife Refuge Partnership on September 26, 2013.

The Maryland Port Administration built the Masonville Dredged Material Containment Facility, east of the cove on the Patapsco River as a repository for material dredged from Baltimore Harbor to maintain shipping channels. To mitigate impacts from the construction of the facility, the local community worked with MPA on three objectives: restore Masonville Cove; establish an environmental education facility at the site; and secure seed funding for environmental education.

The Masonville Cove Environmental Education Center opened in 2009. In October 2012, a portion of Masonville Cove’s nature area was opened to the public. The nature area includes walking trails and offers opportunities for bird watching and fishing from a designated pier. A floating dock was installed for kayakers and canoeists.

Since it’s designation in September 2013, The U.S. Fish and Wildlife Service, Living Classrooms Foundation, the Maryland Port Administration, and the National Aquarium leveraged over $3.5 million for conservation, engaged over 53,700 students, trained more than 480 teachers in environmental education, and developed 82 greenspaces for the public.

Given the successes, the Partnership has expanded to the “Baltimore Rivers to Harbor” Urban Wildlife Refuge Partnership. Collaborating with community-based organizations, government agencies, and other institutions, the Service is connecting residents with green corridors and Chesapeake Bay waters. Building stronger connections to nature and wildlife will enhance the social and economic vitality of Baltimore communities and provide the foundation for a shared regional ethic of environmental stewardship.

Over the course of the next 10 years, the Partnership will grow from the communities around the Middle Branch and Masonville Cove into the key watersheds of Jones Falls, Gwynns Falls, and the Patapsco River through: 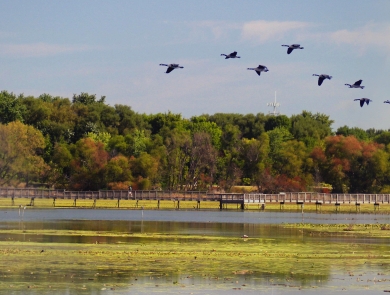