Emperor Geese are an importance subsistence food and an iconic species on Alaskan coastal and tundra landscapes. Truly Alaska’s Goose, 80-90% of the world's population nest on the Yukon-Kuskokwim River Delta and migrate and winter within other parts of Alaska. After a near collapse in the 1980s and subsequent closure to all hunting, the emperor goose population grew slowly and was opened for spring-summer subsistence hunting in April 2017 and fall-winter general hunting in September 2017.

The emperor goose is a small and stocky goose with a short pink-lavender bill, gray body, orange legs, white tail feathers, and a clean white head that sometimes gets stained orange during the breeding season. Adults are blue-gray overall, with stark black-and-white edging to the feathers that creates a scaly appearance. The emperor goose gets its western name from the adult’s white crown and hindneck, which appeared to early explorers like ermine trim on a royal cloak. The Yupik name for this beautiful goose loosely means “the one having a parka hood”.

Where are Emperor Geese found?

The emperor goose is truly “Alaska’s Goose”. Eighty percent of the world’s emperor geese breed along the Yukon-Kuskokwim Delta coast, with the remaining nesting along coastal areas of northwest Alaska and in Siberia. Most emperor geese tough out the winter along the Alaska Peninsula, the Aleutian Islands, and Kodiak Island. They spend the majority of their life in Alaska; some only venturing to Russia to molt.

Migration: along western coast of Alaska and Bering Sea islands, and along the Alaska Peninsula.

Russia: Summer: The north-east Arctic coast of Russia (Siberia). This includes emperor geese from Alaska that fly over to Russia to molt their feathers before returning to Alaska for the winter.

Where do Emperor Geese nest and raise their families? 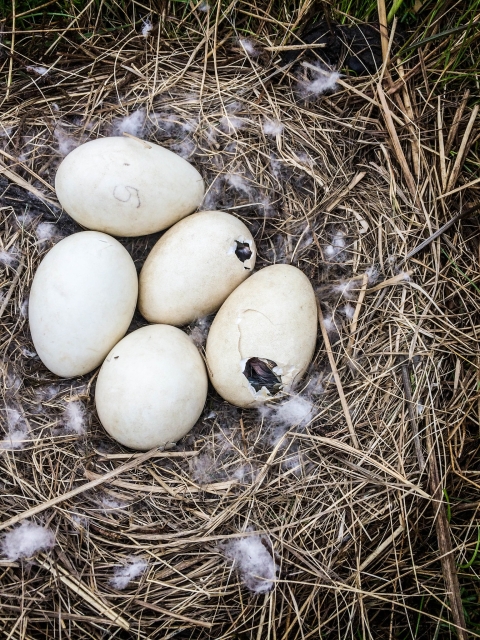 How many eggs do emperor geese lay?

Emperor geese lay between 1 and 8 eggs; they lay an average of 5 creamy white eggs.

Will emperor geese nest again if they lose all their eggs?

No. Emperor geese do not re-nest (make a new nest) or replace eggs within a season.

Do emperor geese nest every year?

No. Some mature females do not nest every year.

How many goslings do emperor geese have and how many survive to become adults?

What is the status of the emperor goose population/how many are there?

In 2021, the population index for emperor geese remained at a level where the consideration of conservation measures for the spring-summer and fall-winter hunts is recommended. The population index has been in this range since 2019. This drop in numbers may be for a variety of reasons and additional surveys will inform whether the apparent decline continues and potentially requires further conservation actions for emperor geese.

How does the US Fish and Wildlife Service count emperor geese and determine the number of geese in Alaska?

What makes emperor geese different from other Arctic nesting geese?

When is the spring-summer subsistence hunt?

As a subsistence hunter, what you can do to help conserve emperor geese for the future?

When is the fall-winter general hunt? 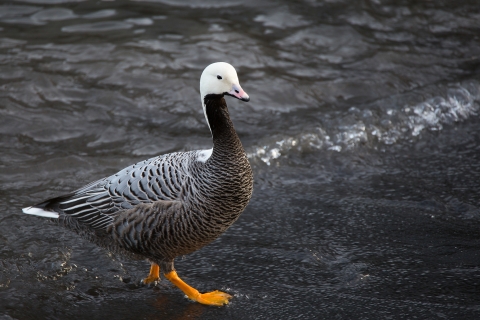 Can I hunt emperor geese in my area?

Why is the emperor goose population apparently declining again?

A number of other factors are also likely contributing to the decline:

Why should I limit my harvest of emperor geese?

Emperor Geese are in an apparent decline.  Harvest regulations were determined by the Pacific Flyway and the Alaska Migratory Bird Co-Management Councils (AMBCC), and described in their Emperor Goose Management Plans adopted in 2016. In 2019, the population of Emperor Geese declined below the threshold where conservation measures were considered.  In the fall of 2019, the AMBCC decided not to make any regulatory changes for the 2020 spring/summer hunting season, but to pursue increased education and outreach activities. The goal of these outreach activities is to conserve emperor geese by voluntary harvest reductions so these birds could remain open for harvest by future generations.

What makes emperor geese more vulnerable to overharvest than other Arctic nesting geese?

What can I do to make sure my children and grandchildren have opportunities to hunt emperor geese?

Learn more about emperor geese in Alaska and conservation efforts through these infographics.

Learn how to identify emperor geese through all stages of their life cycle.

Learn about the life history of the emperor goose.

Learn about the threats that emperor geese face during their annual life cycle.