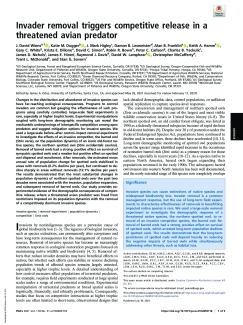 Changes in the distribution and abundance of invasive species invasive species
An invasive species is any plant or animal that has spread or been introduced into a new area where they are, or could, cause harm to the environment, economy, or human, animal, or plant health. Their unwelcome presence can destroy ecosystems and cost millions of dollars.

Learn more about invasive species can have far-reaching ecological consequences. Programs to control invaders are common but gauging the effectiveness of such programs using carefully controlled, large-scale field experiments is rare, especially at higher trophic levels. Experimental manipulations coupled with long-term demographic monitoring can reveal the mechanistic underpinnings of interspecific competition among apex predators and suggest mitigation options for invasive species. We used a large-scale before–after control–impact removal experiment to investigate the effects of an invasive competitor, the barred owl (Strix varia), on the population dynamics of an iconic old-forest native species, the northern spotted owl (Strix occidentalis caurina). Removal of barred owls had a strong, positive effect on survival of sympatric spotted owls and a weaker but positive effect on spotted owl dispersal and recruitment. After removals, the estimated mean annual rate of population change for spotted owls stabilized in areas with removals (0.2% decline per year), but continued to decline sharply in areas without removals (12.1% decline per year). The results demonstrated that the most substantial changes in population dynamics of northern spotted owls over the past two decades were associated with the invasion, population expansion, and subsequent removal of barred owls. Our study provides experimental evidence of the demographic consequences of competitive release, where a threatened avian predator was freed from restrictions imposed on its population dynamics with the removal of a competitively dominant invasive species.

Ecological Services
The Ecological Services Program works to restore and protect healthy populations of fish, wildlife, and plants and the environments upon which they depend. Using the best available science, we work with federal, state, Tribal, local, and non-profit stakeholders, as well as private land owners, to...
Program
Baileys Crossroads, VA
Species

The northern spotted owl is a medium-sized, dark brown owl with a barred tail, white spots on the head and breast, and dark brown eyes surrounded by prominent facial disks. Males and females have similar plumage, but females typically weigh 10 to 20 percent more than males.