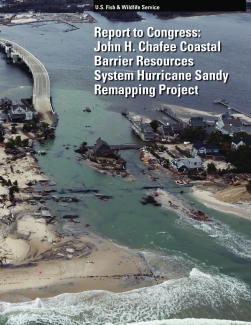 In 2014, the U.S. Fish and Wildlife Service (Service) initiated a project to modernize the maps of the Coastal Barrier Resources System (CBRS) units in the nine states along the North Atlantic coast most affected by Hurricane Sandy: Connecticut, Delaware, Maryland, Massachusetts, New Hampshire, New Jersey, New York (Long Island), Rhode Island, and Virginia. The Service made the proposed boundaries for the project available for public review and comment in 2018 and 2019. This report to Congress, which has been prepared in accordance with section 4 of the 2006 Coastal Barrier Resources Reauthorization Act and section 3 of the Strengthening Coastal Communities Act of 2018, contains final recommended maps for congressional consideration accompanied by summaries of change for each unit included in the project. The report also contains summaries of and responses to the comments received.

The report and its appendixes are available as ten separate volumes for download below. The first volume includes the main body of the report and appendixes A-C (the glossary; project acreage, structure structure
Something temporarily or permanently constructed, built, or placed; and constructed of natural or manufactured parts including, but not limited to, a building, shed, cabin, porch, bridge, walkway, stair steps, sign, landing, platform, dock, rack, fence, telecommunication device, antennae, fish cleaning table, satellite dish/mount, or well head.