Image Details
About the Hatchery 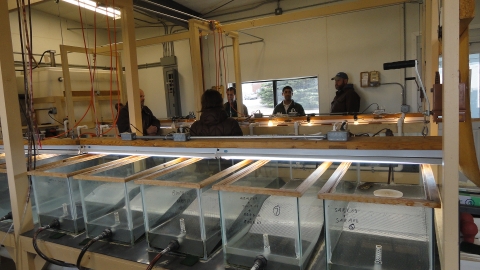 To meet trout production demands, the hatchery facilities include 37 raceways and 16 tanks that are fed by a series of springs and wells. Facilities also include a toad-rearing room for the endangered Wyoming toad.

A brood stock hatchery specializes in rearing fish to adult size, then taking the eggs from those fish, fertilizing the eggs with sperm, incubating the eggs through the fragile early stages, and shipping them to production hatcheries where they are hatched and the fish are raised to a size large enough for stocking.

As a result of the Saratoga National Fish Hatchery broodstock broodstock
The reproductively mature adults in a population that breed (or spawn) and produce more individuals (offspring or progeny).

Learn more about broodstock program, genetically distinct strains of trout have been perpetuated, and the eggs provided to production hatcheries contribute to the multi-million-dollar economic impact of recreational fishing throughout the Nation. Excess and retired brood fish are also stocked in Wyoming waters to support additional recreational angling opportunities. Since 1992, Saratoga National Fish Hatchery has provided eggs to over 50 Federal, Tribal, and State Programs nationwide.