Ash Meadows is the Galapagos of the Mojave Desert

Image Details
Ash Meadows is the Galapagos of the Mojave Desert

Despite being located in the hottest and driest corner of the United States, Ash Meadows National Wildlife Refuge is home to the second greatest concentration of endemic species in North America. In just under 24,000 acres live 26 species found nowhere else on Earth. That's because approximately 10,000 years ago, as the climate warmed, aquatic species survived by seeking refuge in receding and fragmenting wetlands. Isolated for millennia, the survivors evolved into new species in separated "islands of water" scattered across a sea of desert. Nearly all of Ash Meadows' endemic species live in or around its 50 springs and seeps.

Within Ash Meadows’ springs and spring outflows live two varieties of charismatic pupfish, a speckled dace species, ten spring snail species, two water bug species, and a rifle beetle. The surrounding alkali soils and proximity to groundwater provide habitat for nine endemic wildflowers and a multitude of other rare ones. In addition, emergent marshes and mesquite bosques host over 275 species of birds, many international visitors on layover as they journey along the Pacific Flyway. The springs also provide habitat for megafauna like parched desert big horn sheep. Ash Meadows is a gathering place so bountiful in nature’s diversity it can be easy to forget that it is surrounded on nearly all its sides by one hundred miles of desert.

For millennia, Ash Meadows has been a site of species creation, however, only 40 years ago it was on the verge of becoming a site of mass extinction.

We didn’t travel in from other areas to be here, to Ash Meadows. We were placed here. Our ancestors, when we were placed here, this is the area we have to protect. Like I said before, the visitors need to know that and to respect the place. This is not just a place for them, it’s for the future, for future generations, people of all sorts. It was given to us as a responsibility, to respect all life, not for right now…into the future. - Native Elder, Timbisha Shoshone Tribe

The story of this wetland’s conservation begins thousands of years before the United States existed. Countless generations of the Nuwu and Newe’s ancestors seasonally cared for the land known as Koieechee and Qwaiuhwuzzah. In the 19th century, Anglo-American settlers arrived and re-named and re-imagined the land as Ash Meadows. Nonetheless, the Nuwu and Newe continued to live and gather at Ash Meadows until the mid-1900s when large agricultural endeavors displaced them. Driven more by profit than stewardship, the landowners drained and mined the marshes, bulldozed and plowed mesquite meadows, straightened and piped spring outflows, and introduced bullfrogs and bass, thus imperiling endemic species and the original caretakers’ relationship to the land.

Though a 1976 U.S. Supreme Court ruled in favor of federal water rights to protect the Devils Hole pupfish from dropping water levels, this landmark decision did not fully protect Ash Meadows' other endemic species. Soon after, a land development company purchased the land from the farmers to build a 50,000-person resort community. The proposed community would have paved over rare habitats and consumed three times the annual discharge of all 50 springs. In 1984, the efforts of conservationists paid off again, and the Nature Conservancy successfully acquired and transferred the land to the care of the U.S. Fish and Wildlife Service. On June 18 it became Ash Meadows NWR.

The Future of Ash Meadows is Partnership 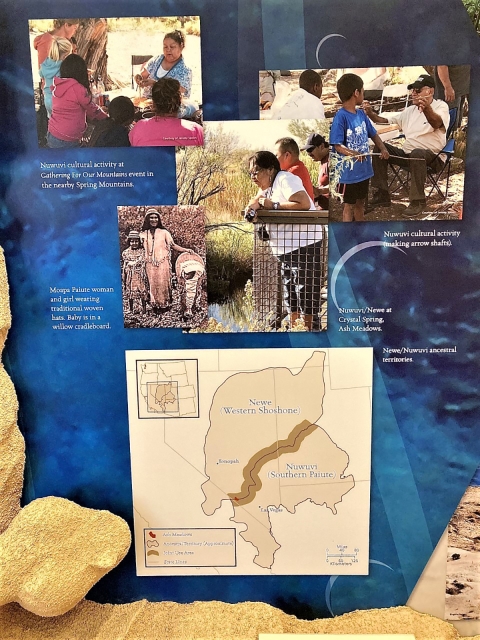 Stewarding Ash Meadows has always been about relationships and that continues to be true in the work Ash Meadows NWR does today.

Since the 1990s, the U.S. Fish and Wildlife Service and its partners have devoted themselves to conserving the water table, restoring habitats, and preserving Ash Meadows’ endemic species. Stream channels have been recreated, endemic species reintroduced to springs from which they’d been extirpated, and invasive fish and plants are managed through manual removal, prescribed burns, barriers, native seeding, and frequent monitoring. Annually, Ash Meadows hosts Nevada Conservation Corps crews and volunteers from the communities to participate in invasive species invasive species
An invasive species is any plant or animal that has spread or been introduced into a new area where they are, or could, cause harm to the environment, economy, or human, animal, or plant health. Their unwelcome presence can destroy ecosystems and cost millions of dollars.

In addition, Ash Meadows hosts a partnership between the FWS, Death Valley National Park, and the state of Nevada to protect the Devils Hole pupfish from extinction. After the Devils Hole pupfish population catastrophically crashed to 35 fish in 2013, the FWS built the Fish Conservation Facility at Ash Meadows. Facility staff collect eggs from Devils Hole and raise the young in a carefully controlled aquarium after they hatch. Once they reach adulthood, they are released into a refuge tank to mate and mingle. There, the refuge tank functions like a lab and an ark should catastrophe strike Devils Hole again.

Perhaps the most meaningful and transformative of Ash Meadows’ partnerships has been work with the Nuwu and Newe. Between 2010-2012, the Desert National Wildlife Refuge Complex (of which Ash Meadows is a part) partnered with seven Nuwu Tribes to produce a Collaborative Resource Stewardship Plan. Together they identified areas of similarity and differences in ecological knowledge systems and management techniques. This collaboration between with the Nuwu has produced the content for the Visitor Center’s interpretive signage as well as an annual Gathering Our Mountains multi-day event for Nuwu families and federal land management employees.

Ash Meadows is the Galapagos of the Mojave Desert, but only as a result of dedicated conservation and the uniting of diverse communities committed to stewardship in the present so that it may be inherited by the future. 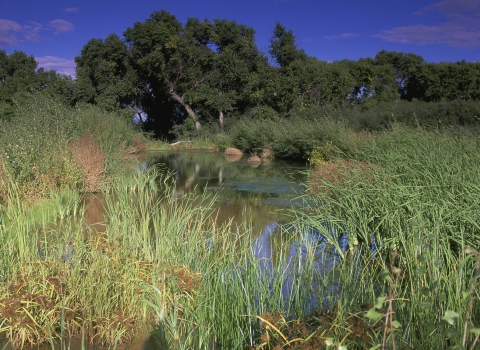 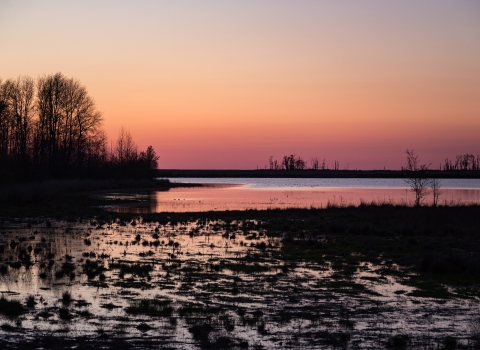 Land Management
5 Things You Need to Know About Wetlands